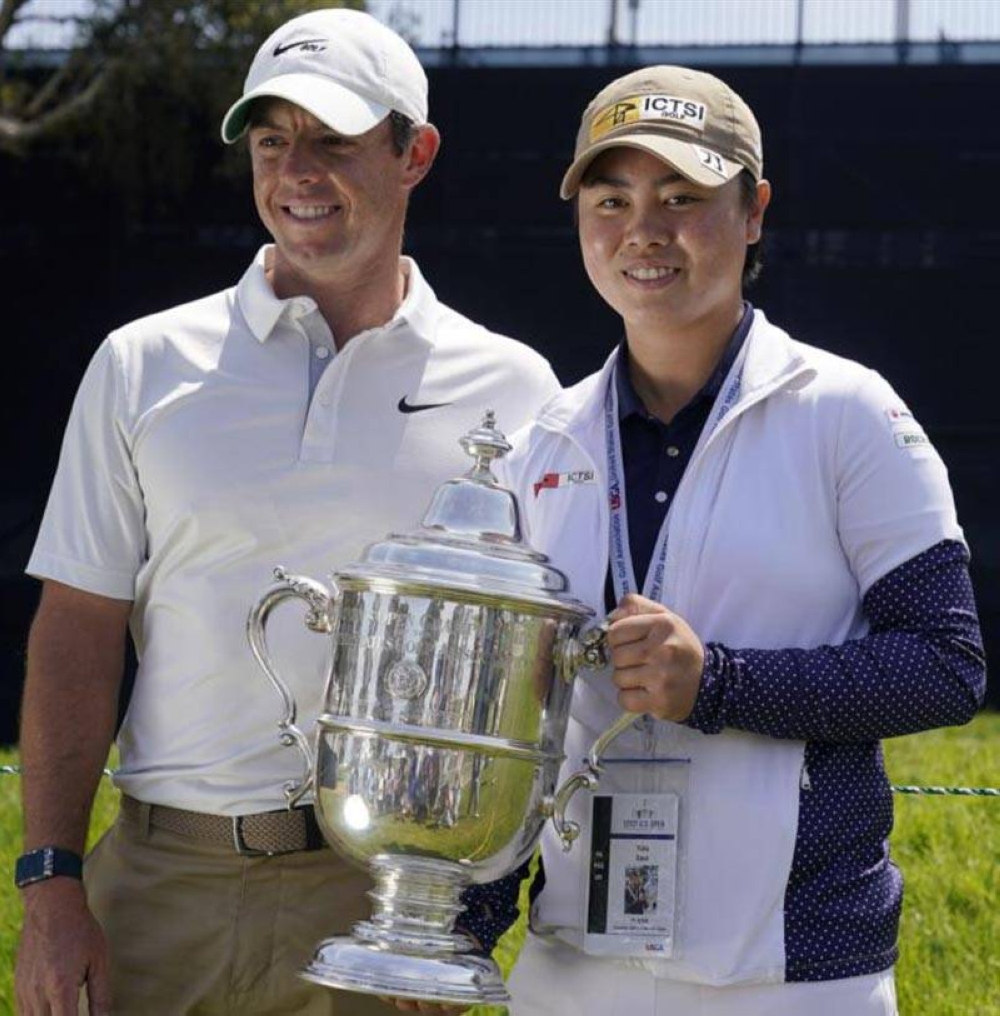 Reigning US Women’s Open golf champion Yuka Saso of the Philippines poses with her champions trophy with Rory McIlroy of Northern Ireland during a practice round of the US Open Golf Championship on June 15, 2021 (June 16 in Manila) at Torrey Pines Golf Course in San Diego. AP PHOTO


SAN DIEGO: The jangled nerves were almost too much for Yuka Saso, and she didn't even have a putter in her hand with the US Women's Open on the line.

She was at Torrey Pines on Tuesday (Wednesday in Manila). She met Rory McIlroy.

Life has been a whirlwind for Saso since the 19-year-old Filipino won the US Women's Open two weeks ago in a playoff at The Olympic Club. She has tried to model her swing after McIlroy, and the four-time major champion served up a video message to her going into the final round.

Saso was at the US Open with her trophy making the rounds, posing with US Open champion Bryson DeChambeau, meeting PGA champion Phil Mickelson.

Saso was nervous meeting her golfing idol, but she also showed off her engaging personality.

"I saw Phil activating his calves, and yeah, I saw Jordan Spieth," she said. "I saw the great players. It's been a great day, and I'm thinking of coming back tomorrow morning before I fly back to Atlanta."

The ultimate goal was to meet McIlroy. She headed to the range, only to find out he already was on the course. So, she met up with him and walked alongside for a few holes.

"He let me go inside the ropes. That was really great," Saso said. "I talked to him about things. I can't share it with you guys. I want to keep it with me."

Saso was headed for Atlanta to get ready for the third LPGA major of the year, the KPMG Women's PGA Championship at Atlanta Athletic Club.

Tiger Woods hit one of the most memorable shots in golf history at the 2008 US Open, sinking a 12-foot birdie putt on the 72nd hole to force a playoff against Rocco Mediate while playing with a torn ACL and two stress fractures.

Among the masses around Torrey Pines' 18th hole was 14-year-old Xander Schauffele, who had posted up against a nearby tree so he could see over the crowd to witness history.

"I had to watch Tiger finish," he said. "I just remember the putt he made on 18 and me being up against a tree and being part of that environment, how cool and special that moment was, and how motivated I was shortly after it to go practice and try and hit the same shot he hit there, hit the same putt."

He grew up in San Diego and Torrey Pines was his high school team's home course, so the USGA's announcement the US Open would return was met with plenty of excitement in the Schauffele household.

Schauffele remembered the moment while walking down the first fairway with his dad during Tuesday's (Wednesday in Manila) practice round.