His sister Pinky Aquino-Abellada said in a statement that Aquino died peacefully in his sleep at 6:30 a.m. She said he had been in and out of the hospital in recent years.

The Aquino family thanked the medical team who looked after the former president. "They became compassionate friends who gave him respect by giving and protecting his privacy," Pinky said.

"Mission accomplished, Noy, be happy now with Dad and Mom," she added. "We love you and we are so blessed to have had the privilege to have you as our brother. We will miss you forever, Noy."

Aquino's health became the subject of speculation in December 2019, when he was hospitalized for a week for a supposedly routine medical checkup.

Former deputy presidential spokesman Abigail Valte had dispelled speculations that the former president was seriously ill, saying his condition was not critical. She also relayed Aquino's gratitude to those who sent prayers and well-wishes.

Ever since he left Malacañang, Aquino had been spending a relatively quiet retirement from politics. The former leader, who is unmarried, returned to living at the renovated family residence on Times Street in Quezon City.

He is the only son of the late senator Benigno "Ninoy" Aquino Jr. and the late president Corazon "Cory" Cojuangco Aquino.

He was a fourth-generation politician and was the chairman of the Liberal Party from 2010 to 2016.

Noynoy was born on Feb. 8, 1960 at the Far Eastern University Hospital in Sampaloc, Manila. He is the third of the five children of Ninoy, who was then the vice governor of Tarlac province, and Cory, daughter of a prominent Tarlac businessman. 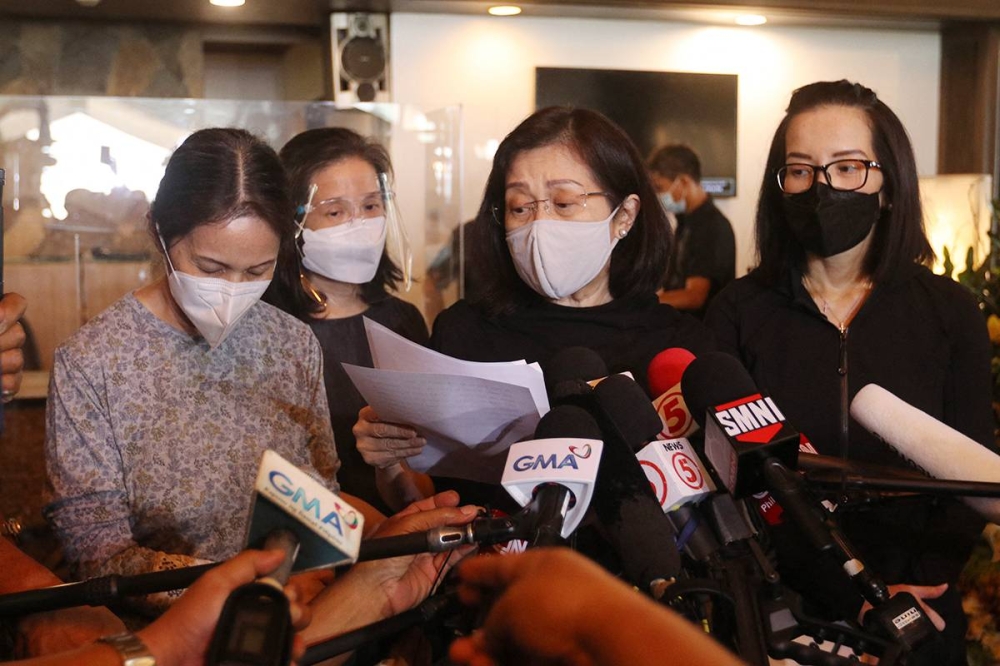 GRIEVING SISTERS Pinky Aquino-Abellada (second from right) and other sisters of former president Benigno Simeon ‘Noynoy’ Aquino 3rd read a statement at the Heritage Memorial Park in Taguig confirming the death of their brother on June 24, 2021. AP PHOTO

He finished his Bachelor of Arts (major in economics) degree from Ateneo in 1981. He was one of the students of former president Gloria Macapagal Arroyo, who taught economics at Ateneo.

Shortly after graduating, Noynoy joined his family in exile in the United States.

He returned to the Philippines in 1983, days after the assassination of his father.

Ninoy, a prominent and vocal critic of President Ferdinand Marcos, was arrested for subversion in September 1972, at the start of martial law.

He spent his life in prison until 1980, when, after a series of heart attacks, the Marcos government allowed him to seek medical treatment in the US, where he and his family began a period of self-exile.

After returning to the Philippines, Noynoy had a short stint as a member of the Philippine Business for Social Progress, working as an assistant to the executive director.

From 1986 to 1992, during the presidency of his mother, Noynoy joined the Intra-Strata Assurance Corp., a company owned by his uncle Antolin Oreta Jr., as vice president.

On Aug. 28, 1987, 18 months into the presidency of Cory Aquino, rebel soldiers led by Gregorio Honasan launched an unsuccessful coup attempt, attempting to lay siege to Malacañang.

Noynoy was two blocks from the palace when he came under fire. Three of his four security escorts were killed and the last was wounded protecting him. He himself was hit by five bullets, one of which remained embedded in his neck.

From 1993 to 1998, he worked for Central Azucarera de Tarlac, the sugar refinery in the Cojuangco-owned Hacienda Luisita. He was the executive assistant for administration from 1993 to 1996 and worked as manager for field services from 1996 to 1998.

In 1998, he was elected to the House of Representatives as congressman of the second district of Tarlac. He was reelected twice, in 2001 and in 2004.

Noynoy was elected senator in 2007. Three years later, he won the presidency after running as the Liberal Party's standard bearer.

Under Aquino's watch, the Philippines enjoyed an economic boom, becoming "Asia's new darling" from being the "Sick Man of Asia."

Among the highlights of his administration were the signing of the landmark peace agreement with the Moro Islamic Liberation Front as well as intensified anti-corruption efforts, bringing to jail those involved in the "pork barrel" scam.

The country also scored a landmark arbitration award in the South China Sea dispute with China during Aquino's term.

Aquino faced his first major crisis early in his term, when several Hong Kong tourists were killed in a bus hostage-taking incident in Manila in August 2010.

He went to face other controversies, from the allegedly slow relief and rehabilitation efforts in the aftermath of Super Typhoon Yolanda in November 2013 to the bungled police operation that led to the death of 44 Special Action Force troopers in Mamasapano, Maguindanao in January 2015.

Pinky expressed the family's lament over the accusations and issues thrown at their brother while he was president.

"Masakit po para sa amin na tahimik niyang tinanggap ang mga batikos (It is painful for us that he was silently dealing with criticisms)," she said.

Pinky said her brother faced all the accusations as he knew he had served with honesty and dignity.

"When you enter public service, when you serve with honesty and dignity and you know you have committed no crimes against the people, hindi ka matatakot magsabi ng totoo (you will not be afraid to say the truth)," she said.