Coca-Cola signs MoA with Manila for bottle collection and recycling

Read Next
US fails to amend poll laws 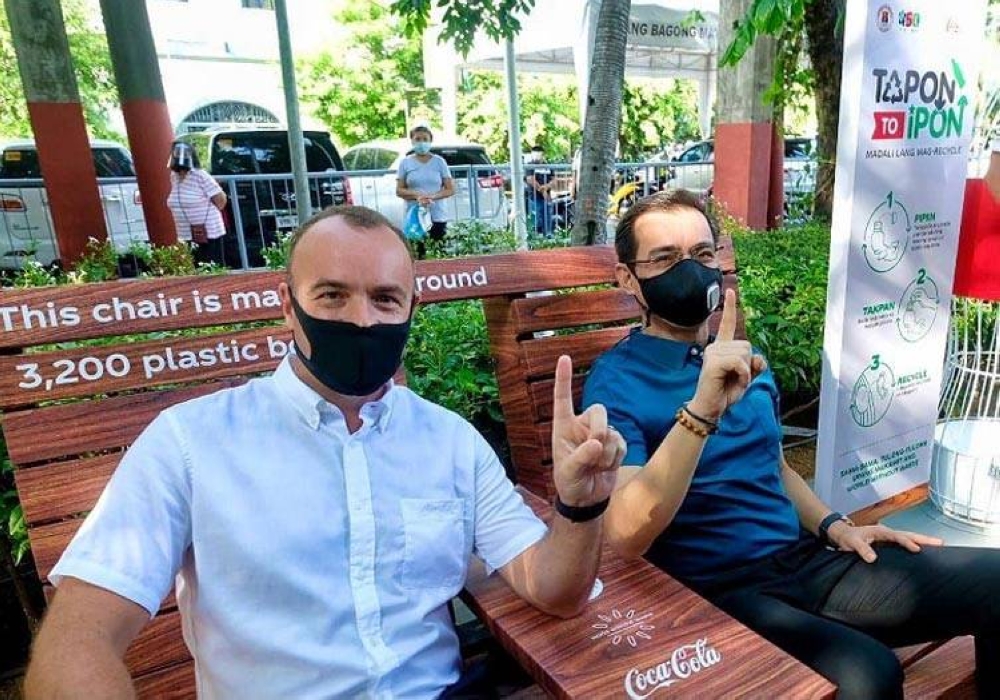 CCBPI President and CEO Gareth McGeown and Manila City Mayor Isko Moreno sit comfortably on a bench made from over 3,000 pieces of transformed PET plastic bottles. The bench was manufactured by Winder Envirotech, a Davao-based recycling company.


COCA-COLA Beverages Philippines, Inc. (CCBPI), the bottling arm of Coca-Cola in the country, has signed a memorandum of agreement (MoA) with the City of Manila for the collection and recycling of PET bottles in the metro. Under the MoA, clear PET plastic bottles - regardless of brand or manufacturer - deposited in contour bottle bins will be collected by Manila's Department of Public Services, and will then be hauled by CCBPI to its PETValue recycling facility in Gen. Trias, Cavite. This is the first in a series of projects lined up for the City of Manila.

Coca-Cola gave contour bottle bins for PET collection, educational panels on proper waste disposal, and park benches made from thousands of transformed PET plastic bottles. The wide-reaching sustainability project for the city was made possible through the support of the Department of Tourism, Culture and Arts of Manila led by Director Charlie Dungo and his team.

The City of Manila is the latest addition to the growing number of cities and municipalities that CCBPI is partnering with as part of its World Without Waste initiative, the company's commitment to collecting and recycling every single bottle and can that it sells by 2030.

The recyclable PET bottles should re-enter the value chain as resource or feedstock for recycling, which will be processed at the PETValue facility.

Granted pioneer status in 2020 by the Philippine Board of Investments, PETValue Philippines - a partnership between Coca-Cola and Indorama Ventures, a global leader in green tech and packaging solutions - is the country's first, state-of-the-art, bottle-to-bottle, food-grade recycling facility. It will employ the safest and most advanced technology to sort, wash, and process used plastic bottles into new ones. The P1B facility is set to be completed in Q4 of 2021 and is expected to have a capacity to process around 3 billion pieces of plastic bottles annually.