Media reports about Sir Richard Branson and Jeff Bezos remind us that these are exciting times to be alive despite our struggles at present with the Covid-19 pandemic. While following those billionaires in the news, we imagine what it was like hearing about Wilbur and Orville Wright flying the first powered aircraft in 1903 and then, reflecting on the progress in aviation since then.

Admittedly, the billionaires' race to "space" has more hype than actual significance. The flights are not technically into space because, as a celebrity astrophysicist pointed out, they are suborbital. Sir Richard's Virgin Galactic reached an altitude of 53.5 miles or 86 kilometers. And when Mr. Bezos blasts off on Blue Origin on July 20, he is expected to fly more than 10 miles higher. In both flights, the spacecraft will remain at their target altitude for only a few minutes. 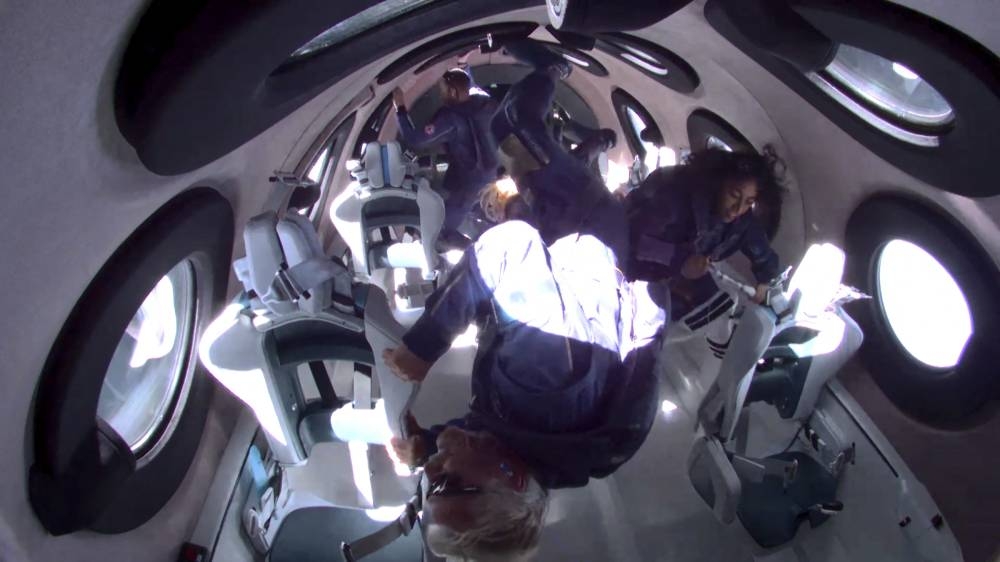 This handout photo courtesy of Virgin Galactic shows Sir Richard Branson (center) and other Unity 22 crew members at zero gravity, viewed as they flew into space aboard a Virgin Galactic vessel, a voyage he described as the "experience of a lifetime" -- and one he hopes will usher in an era of lucrative space tourism at Spaceport America, near Truth and Consequences, New Mexico on July 11, 2021. AFP PHOTO

In contrast, cosmonaut Yuri Gagarin, the first man in space, flew to an altitude of 187 miles or 301 kilometers and reached orbit aboard the Soviet capsule Vostok 1. That was 60 years ago and since then, more than 550 people have flown to space.

Nonetheless, watching Sir Richard and Mr. Bezos is like witnessing a first of sorts. Observers say their exploits mark the launching of space tourism. Indeed, this may be the beginning of when space opens up to ordinary folk even though the flights are brief, not much longer than the average rollercoaster ride and ticket prices are prohibitive for many, costing hundreds of thousands in US dollars.

Remember, though, that the Wright brothers' first attempts at flying lasted only a few seconds and that only the wealthy could afford seats aboard the pioneer commercial airlines some 50 years later. Since then, many more things have changed.

Significant developments were reported in recent years. Another billionaire, Elon Musk, has been successful with Space X in making rockets at a cost lower than what NASA (National Aeronautics and Space Administration) had spent building its own.

NASA itself has been in the news with its missions to Mars and the successful landing of the Perseverance rover on that planet last February. Also this year, China landed its own rover on Mars, joining Russia, Europe and India to have done so. China is even preparing to send astronauts to the moon and to the red planet in the 2030s.

In fact, the only "disappointing" news about space came recently from a US government declassified report unidentified flying objects or UFOs. We were hoping for confirmation about the existence of aliens. But levity aside, that was also a welcome distraction from morbid reports about Covid-19.

With regard to the pandemic, some have commented that the money invested in space ventures should have been spent on vaccines or on some other problems here on Earth such as poverty or education. But that sounds like a false choice.

History suggests that the recent media events could benefit humankind and democratize space in the future. For one, commercial space programs could slash travel time around the world. And with satellites that new spacecraft can launch more affordably, governments can enhance global telecommunications as well as address domestic concerns in agriculture, climate change, disaster-risk management, and even terrestrial mapping and monitoring of maritime territories.

Of course, history also reminds us that advances in aviation, as well as in technology in general, can be co-opted in warfare. We should learn that lesson from the past and insist on ethical development of space programs worldwide. That applies to the Philippines, which may surprise many that it also has a space program.

The Philippine Space Agency, or PhilSA, was established a few months before the pandemic in 2019. Before then, the Philippine government's work on space was limited to research and development and launching three small satellites brought to orbit aboard foreign rockets. Maybe the Philippines can develop its own capabilities to launch satellites, perhaps even Filipino astronauts, into space in the next few decades.

By then, we may look back at today and describe it by paraphrasing Charles Dickens. It was the worst of times, and it was the best of times.