Abaya must explain hand in hoax-making US firm Simularity

Read Next
Gatchalian to pursue law vs abusive debt collectors

PETER Anthony Abaya, the bro-ther of the late former president Benigno Simeon "Noynoy" Aquino 3rd's transport and communications secretary Joseph Abaya, should explain his role in transforming the small tech firm Simularity Inc. into a clever generator of fake news against China in its territorial dispute with the Philippines. This is important to us as a nation, as I hope everyone will realize after reading this column.

The tiny Florida-based tech company, Simularity, in the past week, had gone on a campaign to claim that Chinese vessels were heavily polluting the Union Banks area in the Spratlys with what it outrightly referred to - in its supposed scientific paper - as "poop" and "shit." 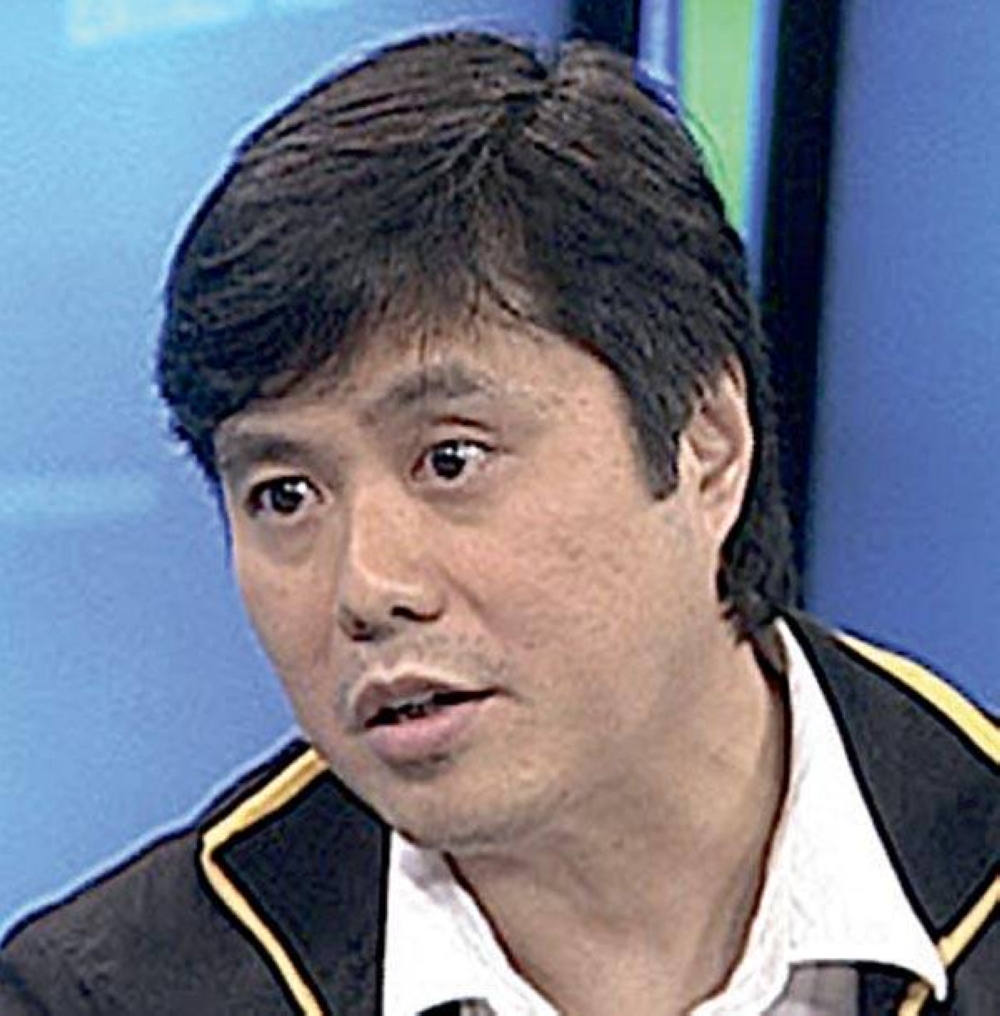 Abaya: Who was he the agent of? PHOTO ABS-CBN


The firm cleverly got to spread its fake news through gullible media, notably GMA 7 and Channel 5's "OneNews," by posting together with its supposedly objective but questionable analysis a photograph taken from a low-flying airplane of a ship with a brownish trail anyone would conclude, because of the report's headline, as human waste discharged by the vessel.

The photo, however, was immediately tracked down by an alert netizen as one appearing in Australia's Daily Mail in 2014 in the Great Barrier Reef in Cairns. The unidentified ship wasn't even discharging waste. It was undertaking dredging operations with the brown material being the usual sediments at the sea's bottom.

Simularity's supposed "analysis" that Chinese vessels were polluting the Spratlys are so seriously flawed that they were obviously fake news disguised as scientific findings. First, there is no proof that the ships were Chinese as fishermen from Vietnam, Taiwan and the Philippines fish in the Spratlys.

Second, and more importantly, Simularity's "analysis" was based on satellite images from the European Space Agency, which it interpreted solely using its proprietary software it calls "AI-driven satellite image anomaly detection." Simularity has used the technology solely on detecting changes on the earth's surface. Set up in 2011, Simularity has had few takers for its technology with only three clients so far.

The firm's claims, in fact, that chlorophyll-a around a ship can be detected from images taken by a satellite hundreds of kilometers in space or even that it automatically means human waste have no scientific basis. In its "shit" report, Simularity listed over 10 scientific articles as references. I plodded tortuously through all of them: none talked about Simularity's way of detecting shit through the presence of chlorophyll-a. 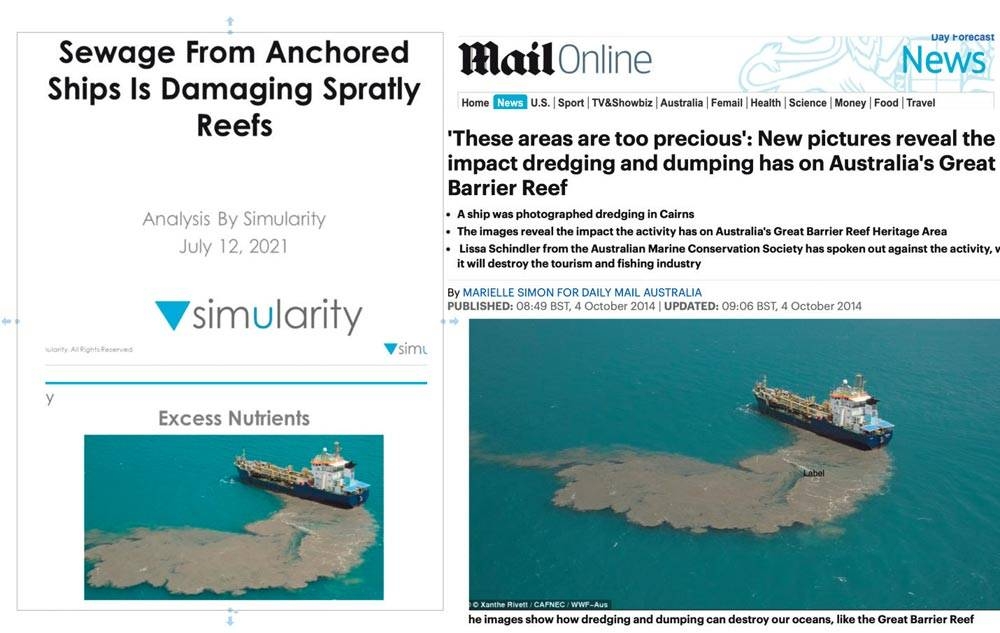 Simularity fake news: not in Spratlys but in Great Barrier Reef; not poop but dredge; and not Chinese but Australian


In its Twitter account, Simularity claims it was founded in 2011 in Delaware to create the impression it has been that way many years in offering its services. However, it seems to have been struggling all those years because of few clients.

It was only in 2018 that it was given a probably life-saving capital infusion when Abaya's Makati-based Shatter Tech Venture Holdings invested $1 million in it on July 17, 2018. Simularity then, for some reason, moved in 2020 to Florida by incorporating a branch there, under the category of "foreign for profit," obviously because all it had was the funding from Abaya's Filipino company Shatter Tech Venture Holdings. Abaya was the third company director after the couple Elizabeth and Raymond Derr.

Abaya's fund infusion has been Similarity's sole funding as reported both in its website and by its vice president for media Peter Koning in an email to me. In an email, I asked Koning: "Has the US State Department contracted Similarity to produce these "South China Sea Rapid Alert Reports?" He replied, "Reports are not paid for. Our investor is Shatter Tech and our customers are confidential."

What could have happened in 2018 that got Abaya to invest in Simularity?

That was the year when Simularity changed its studies ("to demonstrate the power of its software") from a few Middle East countries (apparently to attract US defense contracts) to the Spratlys. After Abaya's investment, Simularity came out with several studies on Mischief Reef, claiming that the Chinese were building massive fortifications there.

Wittingly or unwittingly confirming that it is part of the massive anti-China campaign on the fifth anniversary of the arbitration award handed down on July 12, 2016, Simularity's fake claim on massive pollution by Chinese vessels in the Spratlys was announced in the virtual forum organized by top Sinophobe Albert del Rosario's dubious institute "ARD-Stratbase" on that day.

Simularity practically shed its pretenses as a scientific outfit by spreading that fake photo and even branding blurred satellite images of allegedly Chinese ships as "shits" and starting a hash-tag campaign "#ChinaStop ShittingOnTheSpratlys."

I suspect its funders had demanded that Simularity to go all-out in spreading this "shit story" even to the extent of revealing its partisanship on that anniversary day.

From the above data, I can only conclude what Simularity really is.

With the arbitration ruling and China's demonization losing traction because their lies have been exposed, certain anti-China forces asked Abaya to be the conduit for their money to be given to a struggling technology start-up to undertake a new propaganda tack against China. This was to issue fake interpretations of satellite photos to throw dirt at China's presence in the Spratlys. This was remarkably successful with the Chinese-maritime-militia fake news and the more recent Chinese-ships-shit having been widely reported by a gullible media both here and abroad.

This is why it is important for Abaya to reveal to us why he gave Simularity $1 million and perhaps even more, and for whom or what he was acting as conduit.

Was it US government agencies such as its State Department or even the Central Intelligence Agency?

Or was it del Rosario and the First Pacific Co. whose P50-billion investment for a gas-development program in the Reed Bank was blocked by the Chinese?

This is important for us as a nation to know and to realize that five years after the Yellow regime that had been a US puppet ended, remnants of that cult conspiring with Americans are still moving to push the country to a hostile stance against China.

That kind of stance is so outrageous: since our independence in 1946 and since Aquino's anti-China stance, we have never adopted a hostile stance against any country, not even against Malaysia when it was funding and providing refuge to Muslim insurgents in the South. We have even been very friendly with Vietnam, which even occupies more of the islands and reefs we claim than China.

Furthermore, the opposition here, bereft of any believable strong issues against President Rodrigo Duterte, is desperately trying to use his friendly stance toward China as a rock to throw at him and his presidential candidate in 2022.

If I were Abaya though, I'd check up on his Simularity. Last month, its resident and chief executive officer, Elizabeth Derr, with its chief technology officer, Ray Richardson, set up a nonprofit Simularity Foundation Inc. Now what is that for?