OVER the past 15 years or so, Australia has worked diligently to establish itself as a "big brother" in the Indo-Pacific region by increasing the scope and scale of its development funding for developing countries. This is generally considered a good thing, as Australia evidently does not have the same sort of questionable motives of either China or the United States, making its financial aid seem like aid for the beneficiaries' sake rather than a tool for economic or geopolitical dominance.

However, when it comes to financing developing countries' climate change mitigation and adaptation needs, the current Australian government of Prime Minister Scott Morrison - leader of the ironically named Liberal Party - apparently does have a motive. 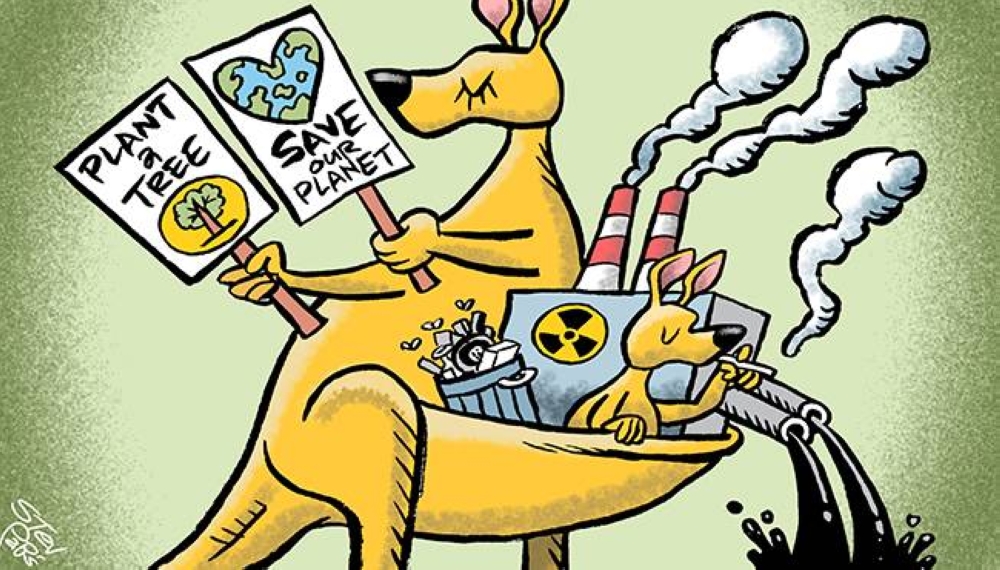 In environmental language, the term "greenwashing" refers to a form of marketing spin designed to mislead an audience or market that one's products, activities, or policies are environmentally friendly, when in fact they are not. Oil companies do it all the time. Australia under the Morrison government does it, too, cultivating the pretense it is properly concerned for the environment and the impact of climate change on vulnerable countries while pursuing a campaign to gut as many environmental protections as possible in its own country. While we might criticize the US and China - the world's two biggest polluters - for having an outsized damaging impact on the rest of the world, Australia may be the worst of the lot, simply because of the Morrison government's deviousness.

To be clear, Australia does contribute substantially to developing countries' efforts towards climate change mitigation and adaptation, particularly in the Indo-Pacific region. The biggest single recipient of Australian aid, for any purpose, is neighboring Papua New Guinea, followed by Indonesia, the Solomon Islands, Afghanistan, Bangladesh, Myanmar, Timor-Leste and the Philippines.

In 2019 (data for 2020 is still incomplete, for obvious reasons), Australia spent the equivalent of $516 million in bilateral official development assistance (ODA) on projects that targeted action against climate change, making it the 11th largest contributor among Organization for Economic Cooperation and Development countries in absolute terms, and 12th largest in terms of climate-related ODA relative to its total ODA spending. This represented a substantial increase, about 71 percent, over its spending for climate-related ODA in 2018.

Besides the spending, Australia also hits the right buttons in terms of rhetoric. In November of 2019, Australia's Department of Foreign Affairs and Trade (DFAT) released its Climate Action Strategy for 2020-2025, characterizing climate change as an escalating threat to sustainable development in countries of high priority within Australian foreign policy (i.e., the Indo-Pacific region).

The strategy named three key objectives: To support partner countries to adapt to climate change and climate-related impacts; to promote low-emissions development in the Indo-Pacific region and to support innovative solutions to climate change, including those funded by private sector investment. In line with these priorities, the DFAT in August 2019 announced the creation of a A$140 million ($97 million) Private Sector Mobilization Climate Fund, which is intended to "encourage private sector investments in low-emission, climate-resilient solutions for the Pacific and Southeast Asia."

Despite its largesse, there is something a bit off-putting about Australia's approach to ODA in taking a superpower's attitude towards it and prefers bilateral activity over collective participation. More than 77 percent of Australian ODA is spent bilaterally, with just 23 percent being contributed to United Nations agencies or other funding facilities, or multilaterals such as the World Bank or the Asian Development Bank, although the amounts involved are still considerable.

With respect to development assistance in general, Australia's preference for bilateralism, which is similar to but not as extreme as China's, might be justified by its long campaign to establish itself as a regional power. When it comes to climate-related assistance, however, the "we follow our own rules" perspective - most obviously expressed by Morrison's announcement in 2018 that Australia would no longer contribute to the Green Climate Fund - can be problematic. The climate crisis, being a global problem, requires a global approach, and bilateralism tends to work against efficient coordination. When one takes a closer look at what's going on in Australia, however, it quickly becomes apparent the Morrison government has reasons for wanting to avoid being subject to global standards and attention.

Exactly a year ago, a major government review of Australia's Environment Protection and Biodiversity Conservation (EPBC) Act had this to say about the state of environmental protection in Australia in its very first two sentences:

"Australia's natural environment and iconic places are in an overall state of decline and are under increasing threat. The current environmental trajectory is unsustainable."

The EPBC deals with ecosystem and species protections, and the review of it made 38 separate recommendations to make it more effective. Despite having had these in hand for almost a year, however, the Morrison government has not responded formally to the review or its recommendations. Instead, it has recently introduced legislation to "streamline" environmental approvals, shortening the process for granting permits for land use such as logging, mining, real estate development, and oil and gas exploration (although, it must be said, the same "streamlining" would presumably apply to projects such as renewable energy as well).

There is some hope the proposed legislation will fail, but the Morrison government even floated the idea in the first place is emblematic of its exploitative perspective on environmental protections and, by extension, climate change action. In the 2015 Paris Agreement, Australia committed to a decrease of its greenhouse gas (GHG) emissions of 16 to 18 percent from 2005 levels by 2030, which was already one of the weakest pledges among developed nations, and less than half of the 35 to 55 percent considered realistically feasible (i.e., least cost).

Disappointing as that commitment is, the Morrison government has not only not done anything to attempt to meet it, it has promulgated policies that will actually increase Australia's emissions. The results of several comprehensive analyses of Australia's current environmental standards and its anticipated economic growth show Australia's GHG will actually increase by 2030, by about 8.6 percent over 2005 levels, if one excludes the difficult to calculate impact of "LULUCF," which stands for land use, land use change and forestry. With LULUCF factored in, Australia's emissions in 2030, while the rest of the world is working to reduce GHG output, could be about 10 percent higher than in 2005, if the current policy trajectory is maintained.

Little wonder then that Australia is anxious to portray itself as a helpful partner in the developing world's climate mitigation and adaptation efforts: as long as nobody notices, it can treat the largesse as a ticket to continue its own harmful policies, the consequences of which are felt mostly by the very countries it is ostensibly helping.