TOKYO: Kevin Durant on Wednesday said two shock defeats for the USA leading into the Tokyo Olympics was the "punch in the mouth" they needed to fire them up as they search for a fourth consecutive gold medal.

Ordinarily the three-time defending champions would be strong favorites in Japan, but they were exposed this month in Las Vegas, crashing in exhibition games to Nigeria then third-ranked Australia.

They bounced back to beat Argentina and world champions Spain, showing improvement with their ball movement on offense and discipline on defense, and Durant said they learned some hard lessons. 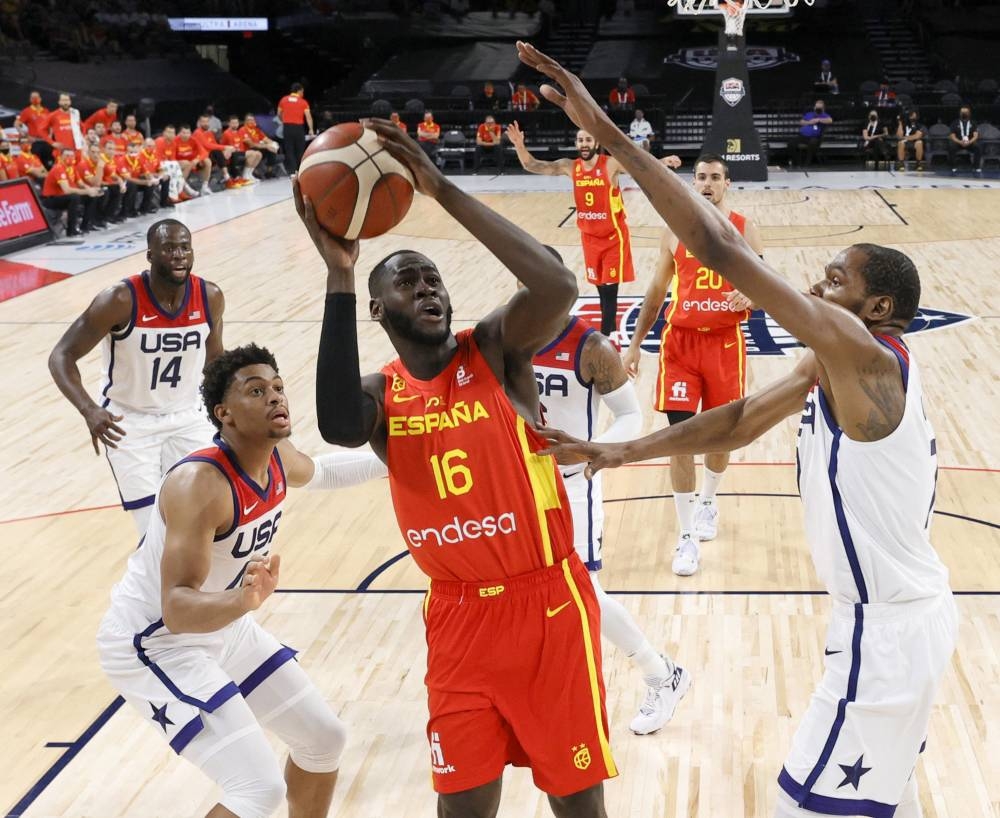 Usman Garuba #16 of Spain shoots against Keldon Johnson #40 and Kevin Durant #7 of the United States during an exhibition game at Michelob ULTRA Arena ahead of the Tokyo Olympic Games on July 18, 2021 in Las Vegas, Nevada. AFP PHOTO

"I feel like we're understanding what coach wants from us. . . I feel like the guys are getting more comfortable with each other and their roles on the team," said the Brooklyn Nets star.

"I feel it's going to go well for us when we start to play real games, so it was kind of good to get a punch in the mouth early on to remind us that this is not going to be a cakewalk."

Durant, a member of the 2012 and 2016 gold medal-winning US teams, is their backbone, only the fourth US male basketballer named to three or more Olympic teams, joining Carmelo Anthony, LeBron James and David Robinson.

While he is on board, several notable NBA stars opted out including James, Anthony Davis and Steph Curry.

Also missing is injured center Kevin Love and Washington's Bradley Beal after he was placed into Covid-19 protocols, with Denver Nuggets center JaVale McGee and San Antonio Spurs guard Keldon Johnson called up to replace them.

In some good news, Chicago Bulls guard Zach LaVine was given the all-clear to travel to Tokyo Wednesday after a Covid scare, while Phoenix guard Devin Booker and Milwaukee stars Jrue Holiday and Khris Middleton are en route after the Bucks sealed their first NBA Finals crown since 1971 on Tuesday.

"We're fortunate those guys are coming in," Durant said.

"But we understand it will take a while for them to get their legs under them and come down off their high of the final. Can't wait to have them around." 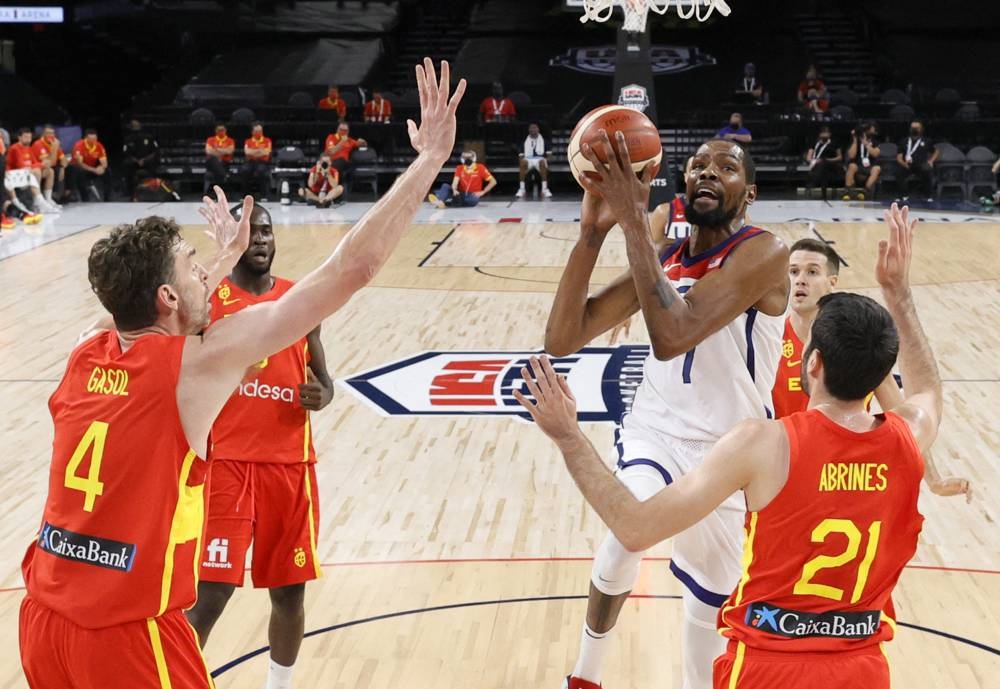 Kevin Durant #7 of the United States drives to the basket against Alex Abrines #21 and Pau Gasol #4 of Spain during an exhibition game at Michelob ULTRA Arena ahead of the Tokyo Olympic Games on July 18, 2021 in Las Vegas, Nevada. AFP PHOTO

US coach Gregg Popovich said no decision had been made on whether Booker, Holiday and Middleton would play Sunday in their opening game against France, given the short turnaround from the finals.

"We haven't made any decision on line-ups. So that's still a work in progress," he said.

"We will see what's going on in the game which will dictate how much or little we might want to use them. It will be an interesting situation."

Popovich knows his team have their work cut out, with the gap between the USA and other leading nations rapidly narrowing as more foreigners play in the NBA and take that experience to their national teams. 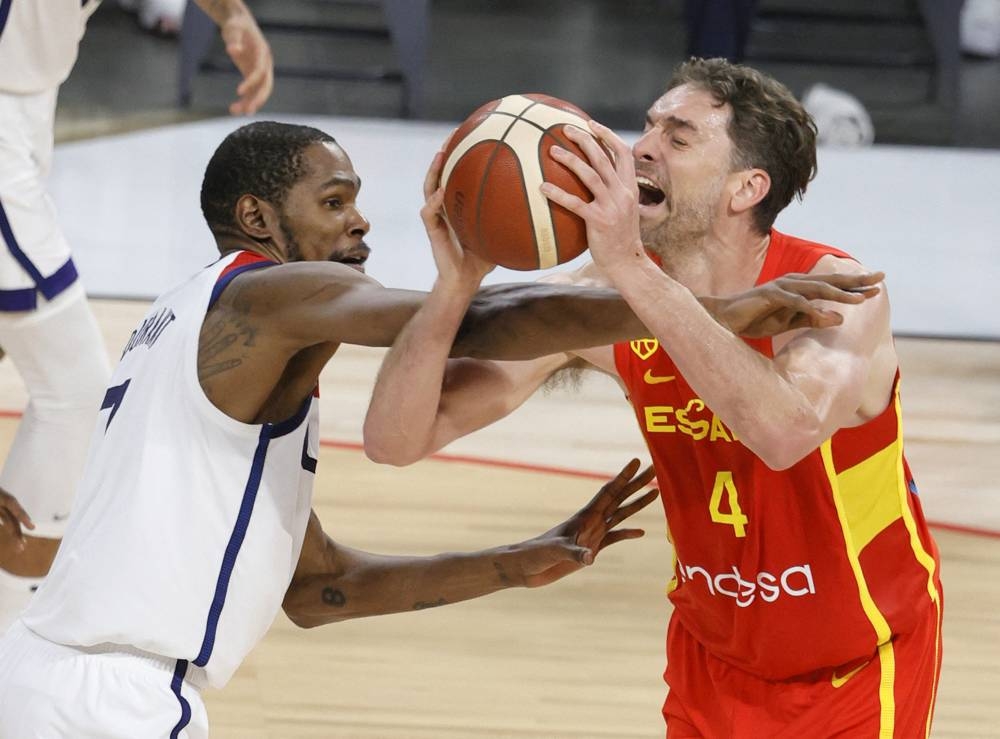 Pau Gasol #4 of Spain is fouled by Kevin Durant #7 of the United States during an exhibition game at Michelob ULTRA Arena ahead of the Tokyo Olympic Games on July 18, 2021 in Las Vegas, Nevada. The United States defeated Spain 83-76. AFP PHOTO

But he remains quietly confident they will rise to the occasion.

"We're very excited about it. It's a high character group that works very hard, they understand the challenge and they are anxious to perform," he said.

"Chemistry is something that we hope forms quickly. These guys get along well, they know each other but haven't played together.

"The chemistry builds day by day, you can't force that issue, it just happens organically and the guys coming in will try and blend in as best they can."