Executive won't retire as long as there are those in need 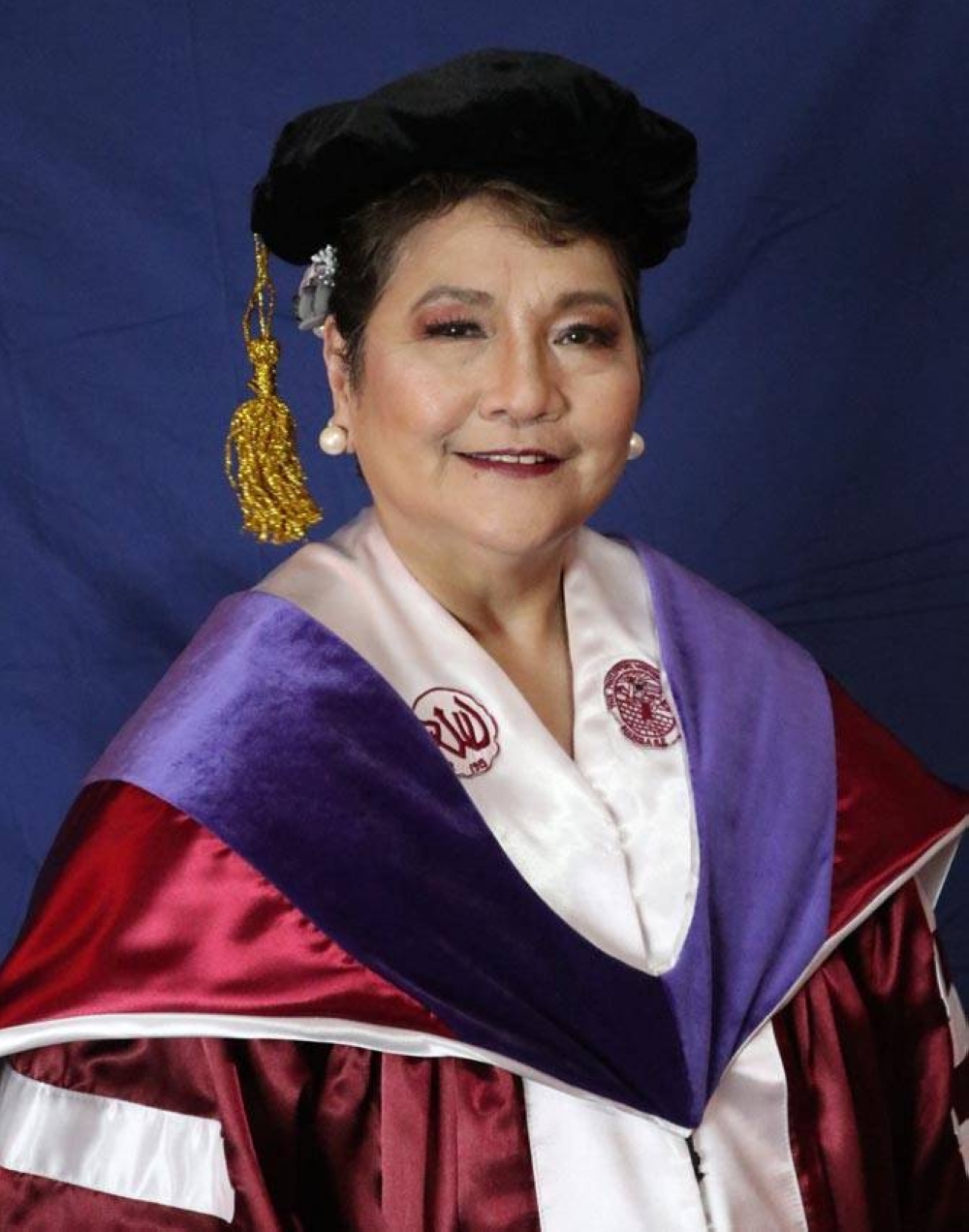 "I believe in the holistic approach to education, one that is built on character development, family solidarity, ethical professionalism and service to the community..." 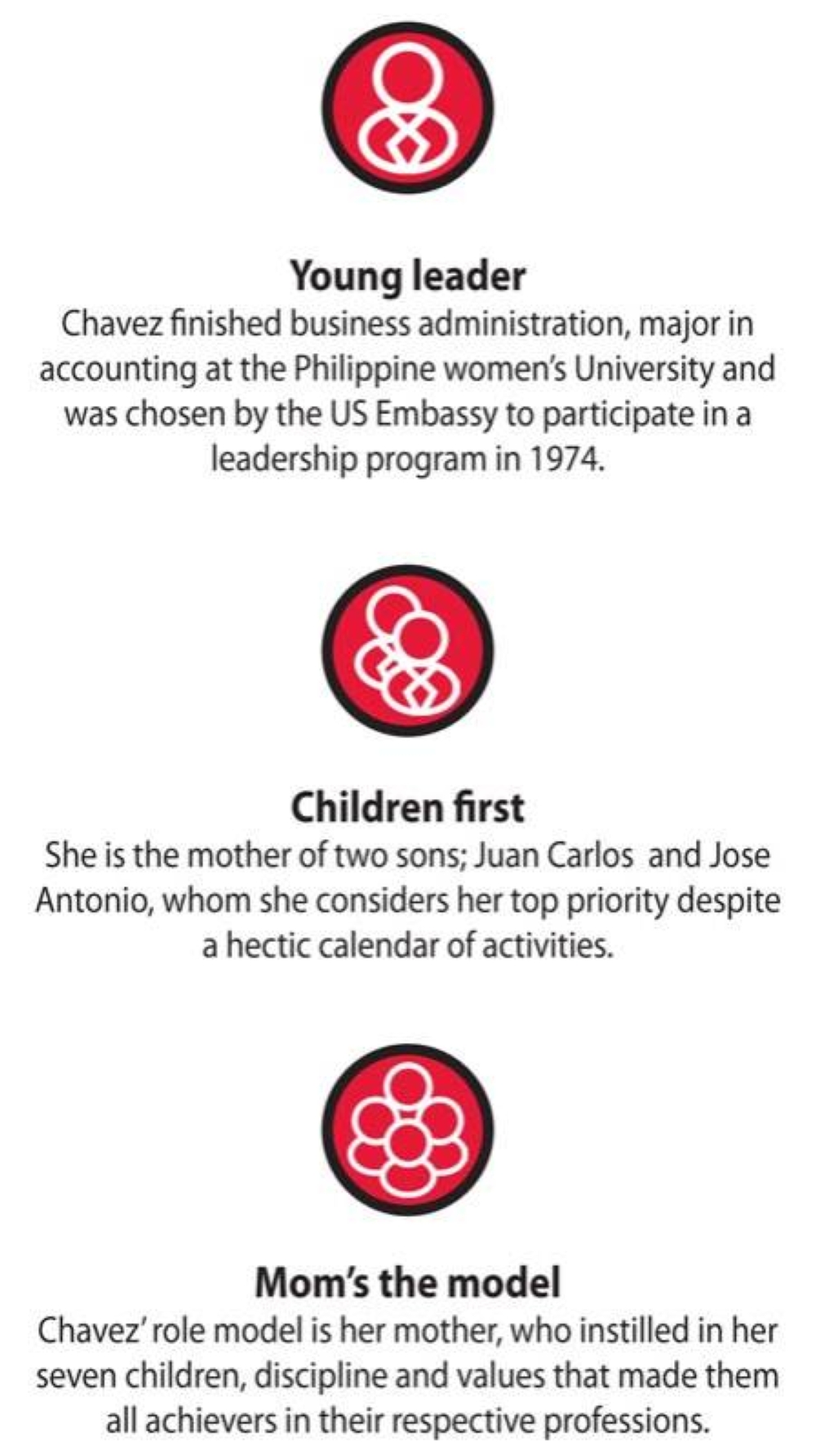 "Successful" is, perhaps, one word that best describes the corporate journey of lawyer Rosario Calixto Chavez. She had all the reasons to fail because of daunting life experiences, but she persevered and rose above all those challenges.

She had to turn down some big opportunities for work, like being assigned in the UK or New Zealand. She could have held an international job position. "I thought I planned my life well," Chavez says. "But God had other things for me. I could not consider myself as a success if I was a failure at home, and that's why I gave up all those offers. There are no limits to what one can achieve through hard work and determination."

The second to the youngest in a brood of seven, Chavez took it upon herself to provide for her family when she started earning good money working for The Hong Kong and Shanghai Banking Corporation (HSBC).

"There was this leadership program sponsored by the US Embassy yearly for student leaders," Chavez recalls. "I was selected as one of the nominees to this, and in the second half of 1974, I was sent to the US. That was my first trip abroad, so it was scary for me. We traveled all around the US, from Hawaii to San Francisco, Atlanta. Then, we stayed in Harvard [Massachusetts]."

She was tempted to remain in the US after the program as her wealthy foster parents were convincing her to do so. "But the program did not allow you to overstay," Chavez explains. "It was not good for the image of the Philippines if I would do TNT [tago ng tago or a hideaway] in the US." 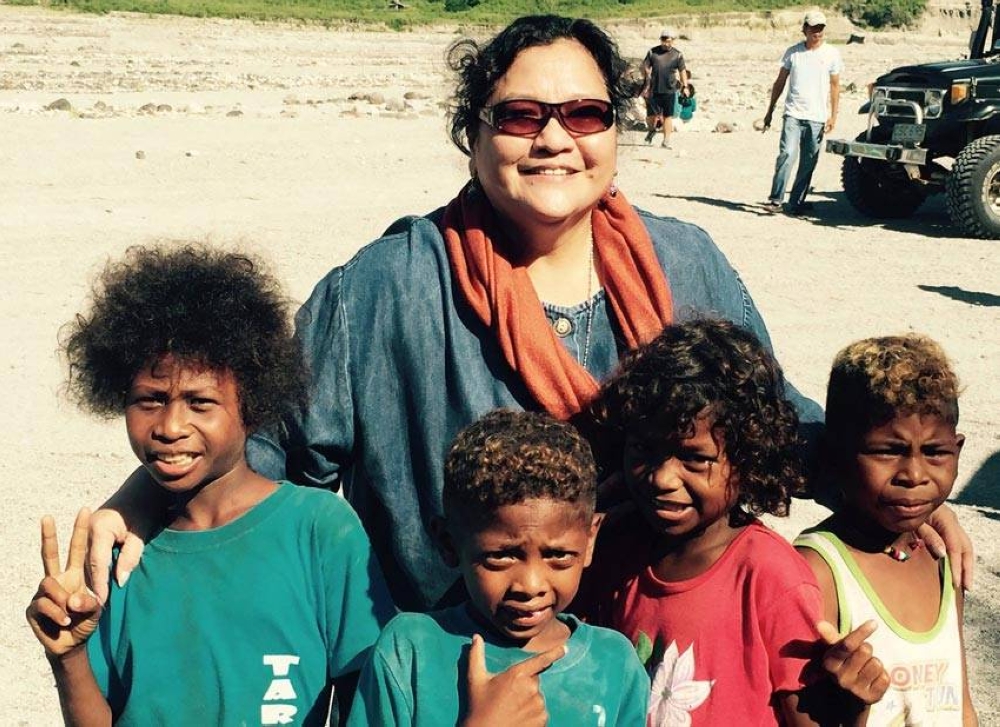 SUPER HEROI NE (Clockwise) Chavez during an outreach day for indigenous communities, which forms part of her Rotary Club advocacy 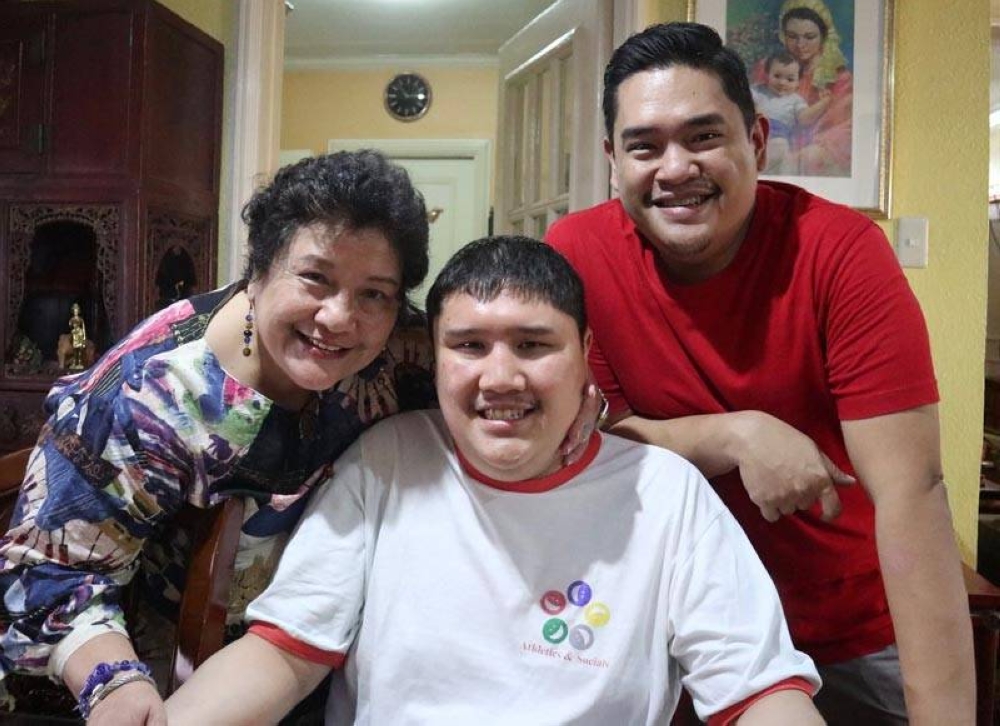 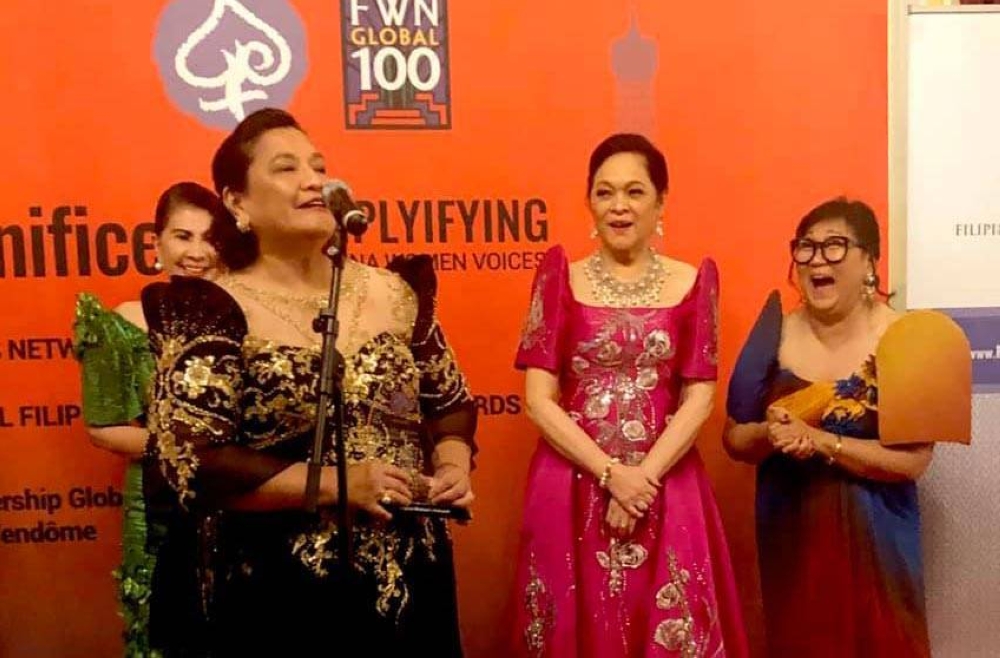 As an awardee of the Filipina Women’s Network’s (FWN) Most Influential Woman in the World, Founder and Pioneer Category held in Paris, France in 2019. CONTRIBUTED PHOTO S


When she eventually returned to Manila, Chavez was met with job offers from Joaquin Cunanan and Company, an insurance agency, as well as SGV (SyCip, Gorres, Velayo) and Company. But she chose to work for the globally renowned HSBC. She prioritized working for the Union, working on the employees' benefits. On her first negotiation, she snagged a 50-5-5 salary increase for the employees. On the second, she was able to secure a 90 percent increase for the Union, which was unprecedented in the banking industry at the time.

She stayed with HSBC, retiring in 2010. The exit pay she received from the company, she invested in real estate. "Now I'm doing settlement of estate, property related and some labor cases where I don't have to appear in court, because you only need to submit position paper," she adds.

"I don't go out to court. I turned down appearances in court because of Covid-19. It's scary. I reinvented my career as a real estate planner. I had to take a real estate brokers' exam. Para one-stop shop ako. Lahat related to properties."

Chavez tied the knot in Chicago, Illinois in 1984. "My friends were convincing me to stay in the US, but I was compelled to go home because my dad was dying then." Her marriage, however, lasted for only a decade and she subsequently filed for divorce. Her two sons, Juan Carlos "Chuckie" and Jose Antonio "Anton," were not born in the US and were not petitioned. "Through the child citizenship act of 2000, if you are the child of a US citizen and under 18 years, you automatically acquire US citizenship," Chavez explains. "Meanwhile, through the naturalization act, they also hold Philippine passports. My sons are dual citizens."

She did not actually aspire to become a lawyer, but all the qualities to become one were evident during Chavez's childhood days. She was a consistent honor student, a born leader, a good declaimer and orator and an athlete. She was independent and always stood for what she believed was right. "I could blend very well with people from different walks of life," Chavez says. "On the extreme side, I mingled and played with children living in the squatter's area. It was easy for people to notice the difference as I would always be seen wearing a nice dress with ribbon and shoes, in contrast to my playmates who wore tattered clothes.

"I always had a soft spot for the poor which was why even in my school days in PWU, I carried out in Pamaskong Handog every year in nearby areas in Malate, Manila where my family moved in my secondary school years."

Chavez was determined to finish her education with flying colors. "I took advantage of all opportunities so that I could provide a better life for my parents, especially my mother, who sacrificed a lot to raise seven children, all of whom are successful in their respective professions."

Of her mother, she says: "I admired her, being the only girl among five children of an affluent, Spanish family, who gave up this comfortable life to be the best mother one could be. Even at a time when the income was barely enough to sustain the family needs, and in spite of constant prodding by her father to leave her family and continue her education in Spain, she never gave up on us. She also instilled in us, her children, discipline and values that made us all achievers."

Chavez is currently charter president of the Zonta Club of Parañaque, which celebrated its 10th anniversary last year. "I am proud of what we are able to achieve in my Zonta during the pandemic, and we just submitted our nomination for a governor's award for our flagship project." Recently, the group launched Tuklas Karunungan sa Kaisipan, transitioning to online learning as the new normal, in partnership, with Kaisipan, Inc, a non-profit organization.

"Even during this pandemic, I am able to practice my law profession and teach law subjects, while working from home," Chavez says. "I reinvented a second career after retirement from HSBC. At the moment, life has been centered on the family as we are all working from home. Unwinding has never been a problem, as even while I am busy with the civic organizations, I make time for fellowship, but also make sure that my two sons are top in my list of priorities."

The late educator, Senator Helena Benitez, fondly called "Tita Helen" in PWU, was Chavez's role model. "I dreamt of being like her someday - an educator, legislator, diplomat, empowered woman," she admits. "As I am nearing the conclusion of my term as president of the PWU Alumni Association and as ex-officio member of the Board of Trustees of the PWU in February 2022, I initiated a project, the first ever virtual musical event, Tita Helen - A Musicale on Her Life Philosophies and Aspirations, staged last June 27, her birth anniversary.

"I have always attributed my success to PWU and never regretted having given up a full year high school scholarship in Paco Catholic School to transfer to PWU-JMD [Junior Middle Division], as I felt there was more to just topping the class in academics.

"I believe in the holistic approach to education, one that is built on character development, family solidarity, ethical professionalism and service to the community, which I found in PWU. It was my extreme desire to provide the much-needed support to my alma mater by way of a scholarship program to boost enrolment in PWU, which was greatly affected by the pandemic."

Chavez' work entails a lot of coordination with the government and private offices. She says: "Being a senior during this pandemic, I am able to continue practicing my law profession from home by partnering with a fellow PWU-JMD graduate, who acts as my liaison officer."

This feisty community leader apparently has a lot on her agenda even in these daunting times. Yet, she is not complaining. In fact, she wakes up each day, driven and passionate about starting anew.