Twenty years after 9/11: Institutions in decline, but religion rising

Read Next
Que horror! The corps is sick 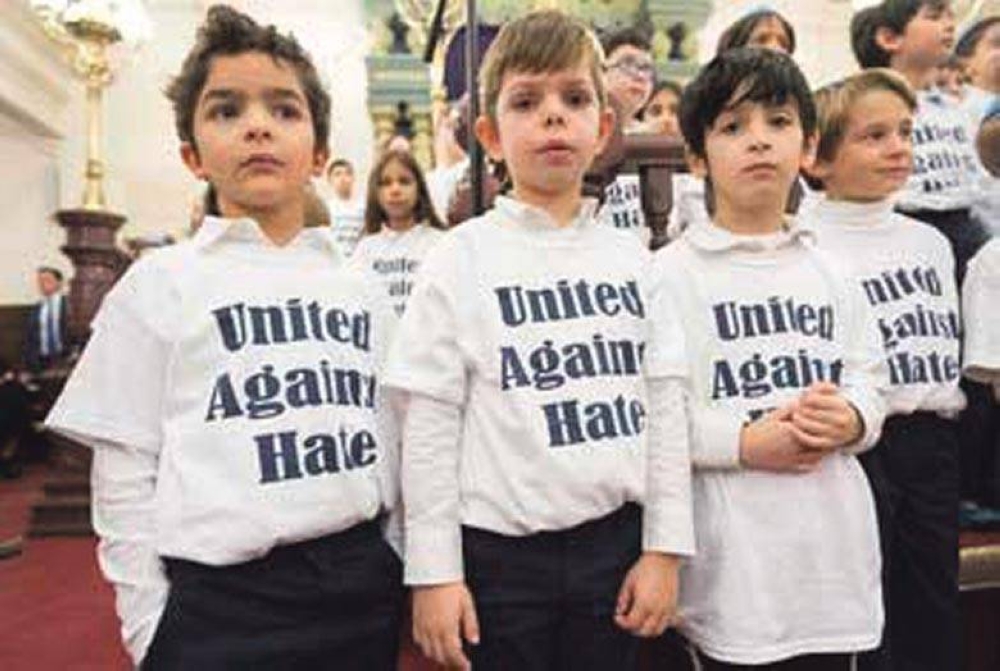 Children joining a rally against hate in this undated photo. UN PHOTO


NEW YORK: Described as the "worst terrorist attack ever in the United States," Sept. 11, 2001 is a moment which has led to multiple transformations cascading around our world.

US President George W. Bush and his administration described the attacks on the World Trade Center Towers and the Pentagon as an "attack on freedom," an act of "evil," and he quoted a biblical passage in his first address to a nation in shock, and later described the US position as "a crusade."

Religious language was normal in the political narrative of some leaders in the Middle East and in parts of Africa and even Latin America. But this was an interesting demarcation of the discourse of politicians in the Western world.

The United States clearly saw itself a force of goodness, and there was an evident demarcation of the attackers as evil. Most nations around the world stood in solidarity with the pain of a nation still perceived by many as a beacon of freedom and democracy.

But a succession of foreign policy and military decisions by the Bush administration and subsequent administrations under four different presidencies effectively ended that sympathy and elicited what is today a major credibility crisis for the United States.

Afghanistan, now referred to as the "longest war in American history," began with US forces allied with warlords of dubious track records in humanity, let alone credibility, and ended with a withdrawal that was heartbreaking and chaotic, albeit rather politely referred to as "surprising" by the US and its NATO allies.

The background to the US series of decisions is Guantanamo (described as "a beautiful...sunny...island" by Donald Rumsfeld). The symbol of America's willingness to use any means to counter evil, Guantanamo permanently damaged the US' own self-image as are its interventions in Afghanistan and Iraq, and the by now rather farcical "war on terror."

The dismantling of the Saddam regime in Iraq was akin to a theater, where the Coalition Provisional Authorities (CPA) made a series of catastrophic decisions. These ultimately fueled within the entire Arab region a series of conflicts within and among its countries, dealt a massive boost to sectarianism between Sunni and Shia Muslims reverberating around the world, reconfigured regional power politics in the Gulf, and gradually created fertile ground for rampant misogynistic and right-wing discourses globally.

The fact is that despite unprecedented global civil protests, wars were carried on. These wars and their many impacts in and around every corner of the world, including the very legitimacy of so-called "just war" narrated by many religious leaders inside and outside of the United States, ultimately resulted in a loss of confidence in all political institutions.

Whether the US Congress, the Indian parliament, or the legislatures of Brazil or Russia, political institutions are facing a crisis of legitimacy and efficacy, and political parties, globally, appear to veer from one source to dissonance to another.

We now know that the "free press" of the US (and elsewhere) actively took part in propagating the lies about Iraq's weapons of mass destruction, among many other fallacies, which contributed to the gradual unraveling of the myth of objective media institutions. A myth effectively shattered today by the normalcy of the phenomenon of "fake news" and the ultimate casualty thereof - 'truth.'

Business corporations are already maligned thanks to one profit-mongering or environmental scandal after another, and the financial institutions took a massive hit with the 2008 financial crisis and its ensuing free market prodigies.

Child sex abuse rocked the world's largest and oldest religious institutions, and although the present Pope is considered redeeming by many, the fact remains that the Catholic Church today does not leverage nowhere near the same power it used to just a couple of decades ago.

Instead, it is a Church, or a belief, now strongly rivaled by Evangelical groups in many of the largest countries and continents of the world. The collateral damage of this decline of institutional legitimacy is a shrinking civil society space and the near extinction of a form of accountability: human rights.

Meanwhile, an interest in "religion" and so-called values and values-based discourses, is on the rise among policymakers, within multilateral institutions and think tanks, North and South.

The interest was certainly spurred on by the fear of "Islamic extremism," which seemed to emerge in Western public consciousness with the Muslim outrage about a Salman Rushdie novel and the Danish cartoons (and then Charlie Hebdo), but then grew to be seen through the prism of al-Qaida, which now pales in comparison to the so-called Islamic State, Boko Haram, al-Shabab and more. Although less interest is paid to other religiously inspired political and militaristic actors, they exist too.

But this interest in values and religious engagement leads to more attention being paid to religious actors as "peacemakers," "mediators," "peacebuilders," and as developmental and humanitarian partners.

Especially since we see religious organizations serving desperate needs resulting from the Covid pandemic and natural disasters all over the world. This is an interest I am biased in favor of. But we should not be blinded by it.

Elsewhere I have written of how this interest by supposedly secular politicians and policymakers, if not deliberately multi-religious in nature, and intentionally geared toward energizing - and being accountable to - a vibrant civil society, and which consolidates existing multireligious platforms (rather than trying to build new ones), can be a source of disruption, political instability, a new business and profit-making industry, and cause overall harm.

The rise of "religion" in a world reeling from the collapse of multiple forms of institutional legitimacy, is a double-edged sword. Some religious arguments were used - and still are - to vilify and disenfranchise Indigenous peoples, to legitimize all forms of violence - from the apartheid regime to Nazism and its offshoots today, to the most egregious forms of gender-based violence - and to justify ongoing wars and conflicts between peoples.

So, religion is no panacea. But to avoid a scenario where religions serve as fodder for new ideologies of opportunism, injustice, and violence, requires us to ensure that some of the legacies of Sept.11, 2001, namely the distrust of the infallibility of institutions, is upheld, while the decline of the observance of human rights as a standard of justice is reversed.

Our "salvation" and that of our planet may well be in the upholding of all human rights. No one religion, or religious institution, actor or leader owns this set of rights, or can realize them alone. Just as no government can and has. In fact, we arrived at the Human Rights Articles precisely by elucidating the values common to all faiths.

For us to uphold all human rights, we must hold all religions and their institutions and their leaders accountable to working together, to serve all peoples.