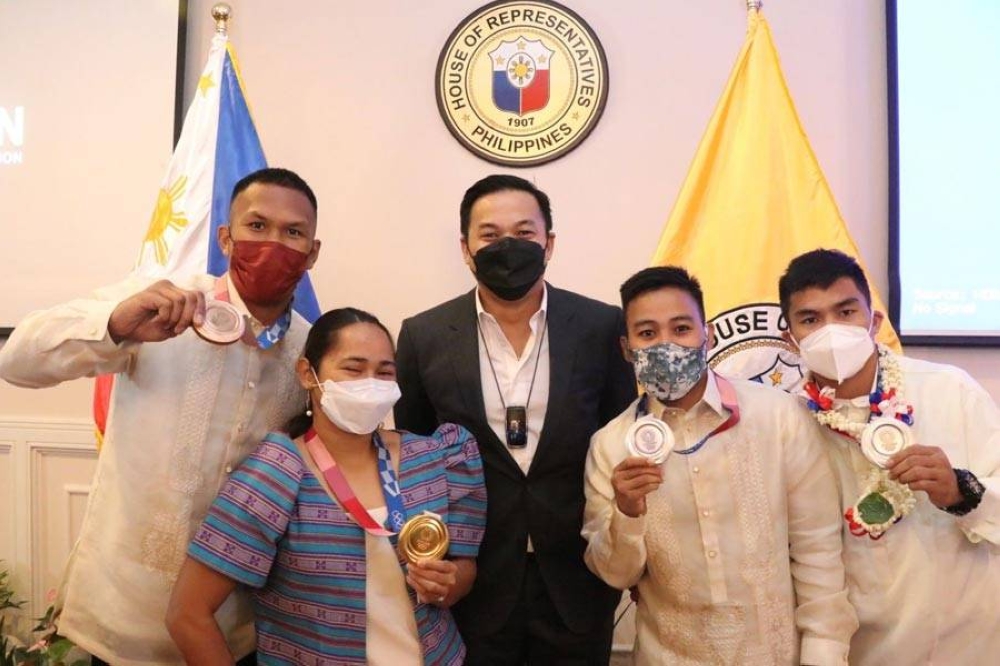 
The rewards - monetary or in kind - came in great abundance for weightlifter Hidilyn Diaz and three other Tokyo Games heroes, but Deputy Speaker Mikee Romero (1Pacman party-list) said they fully deserved those blessings.

"The rewards they have received and to be received were for their blood, sweat and tears during their Spartan-like training up to the tournament proper in Tokyo, so it's right and just for them to receive such abundance," said Romero during a recent congressional ceremony where Diaz and boxers Nesthy Petecio, Carlo Paalam, and Eumir Marcial were honored.

"For almost a month, the Tokyo Games heroes and other members of Team Philippines made us extremely proud to be Filipinos. Time and again, they displayed the indomitable Filipino spirit," added Romero.

Apart from the additional P3 million cash incentive she received from the "pass the hat" drive initiated by Speaker Lord Allan Velasco, Romero and other key leaders of the House, Diaz was conferred the inaugural Congressional Medal of Excellence - an award given solely for Filipino athletes who have won a gold medal in the Olympics.

On other hand, silver medalists Petecio and Paalam and bronze winner Marcial were conferred with the Congressional Medal of Distinction.

"I am immensely humbled to have received the Congressional Medal of Distinction, an award that would represent our achievements in the field of sports. I greatly appreciate this honorable gesture from our House of Representatives, specifically Speaker Lord Allan Velasco and Deputy Speaker Mikee Romero. I hope this will serve as an inspiration to all the youths of our country," said Marcial in his Facebook post.

Petecio, who gamely posed with several lawmakers and their staff, and Paalam also received P2 million each while Marcial got P1 million.