SENATE Bill (SB) 2239 is described in virtuous ways, hinting that it would introduce regulation protecting the youth and curbing cigarette addiction. But that portrayal is a ruse because the bill actually proposes to relax regulations on vaping, e-cigarettes and similar products. We urge senators to vote against the measure, which is also known as the "Vaporized Nicotine Products Regulation Act."

Earlier this year, the House passed a counterpart legislation, House Bill 9007, or the "Non-Combustible Nicotine Delivery Systems Regulation Act." Then, last month, senators approved its version for plenary deliberation. The bills appear to be making their way through Congress faster than the coronavirus.

In statements, proponents of SB 2239 claim it will prohibit minors, specifically those younger than 18 years old, from purchasing vapes and similar products. What the press releases leave out is that there is an existing law, Executive Order (EO) 106 Series of 2020, that sets the minimum age at 21 years old.

That EO regulates the manufacture, distribution, marketing and sale of unregistered and/or adulterated electronic nicotine/non-nicotine delivery systems, heated tobacco products and other novel tobacco products. These are essentially the same products that the Senate and House bills hope to regulate. Also, EO 106 is almost identical to HB 9007, except for the provisions that make these categories of sin products more accessible to younger people. 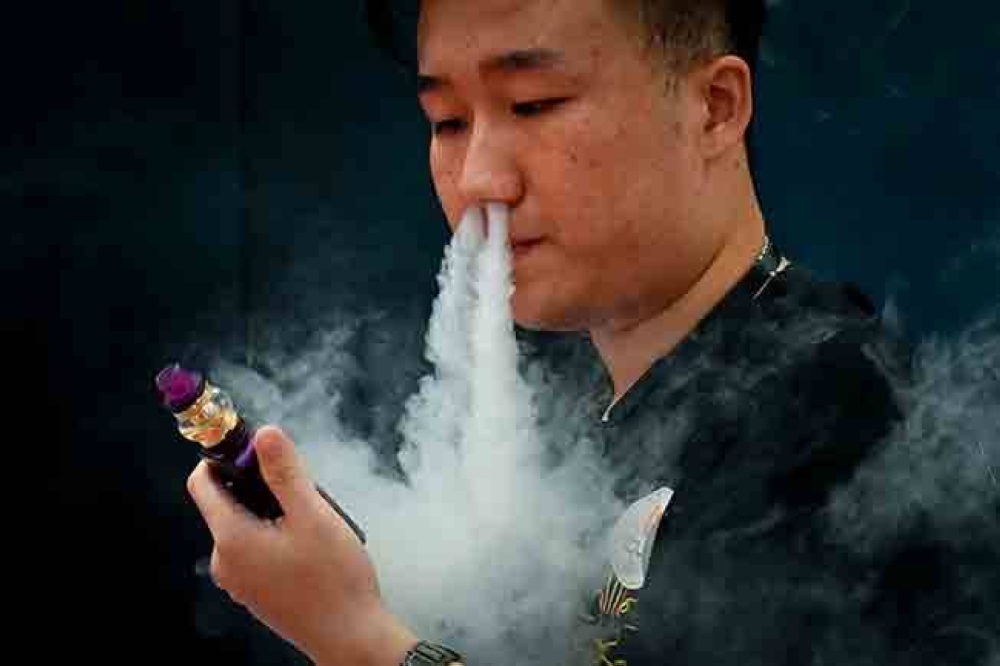 This file photo taken on June 28, 2019 shows a promoter of an e-cigarette company smoking an electronic cigarette at the Beijing International Consumer Electronics Expo. AFP PHOTO

In a seemingly deceptive presentation, the proponents of the vaping bills announced that the minimum age will be at par with the requirement for conventional cigarettes. The bills leave out the fact that doing so lowers the minimum age to buy those products.

Worse, both the House and Senate versions of the vaping bill would allow these new sin products to be sold online. This feature is another departure from EO 106, which places restrictions and guidelines only on over-the-counter sales.

Online sales worry health advocates because that would make vapes and similar goods more accessible to minors. The Senate and House bills do require proof of age when purchasing vapes and similar products, but that is virtually impossible to impose online. Note that all sorts of prohibited goods, including illicit drugs, can now be purchased online.

Another misleading claim in the campaign to pass the bills mentioned is that vapes and novel tobacco products are a healthier alternative to regular smoking. The proponents claim that they hope to wean people from their addiction to conventional cigarettes and other tobacco products, which are supposedly deadlier.

As we have said before in this space, medical experts here and abroad dispute those claims. In another editorial, we cited the American Heart Association that found people were likely to continue smoking conventional tobacco products along with vaping and using e-cigarettes and other similar products.

Some studies also found the new products to be more harmful than regular cigarettes. Vapes and similar products deliver higher concentrations of nicotine and other addictive compounds relative to conventional tobacco products.

In a Senate hearing last month, some 60 groups came out against SB 2239. Dr. Maria Encarnita Limpin, president of the Philippine College of Physicians, told the senators that the House version was passed without recommendations from the health sector.

On its Facebook page, the physicians' group said this about SB 2239: "The medical community questions the provisions included in the bill and underscores how it further increases the opportunity for the tobacco and vaping industry to widen its market, a move that is regressive and anti-health."

Dr. Benito Atienza, president of the Philippine Medical Association, testified that if SB 2239 was approved, vapes and other products like it would be a gateway to substance abuse, particularly for younger people.

Like we said about the House bill, the Senate should vote against SB 2239 if it cannot be as tough or tougher than the existing law on vapes, e-cigarettes and similar products. Regrettably, the House bill passed.

If the Senate passes its bill and if it makes it all the way through the legislative process, the president should veto it.