AMID the challenges brought about by the coronavirus disease 2019 (Covid-19) pandemic, the 13th month pay of workers in the private sector remains a legal obligation by the employers, according to the Department of Labor and Employment (DoLE).

Labor Secretary Silvestre Bello 3rd said that the only recourse of hard-up employers or businesses, particularly micro, small and medium enterprises (MSMEs) that were badly affected by restrictions and lockdowns to dialogue with their employees so that they can meet half-way and come out with a win-win solution to the problem. 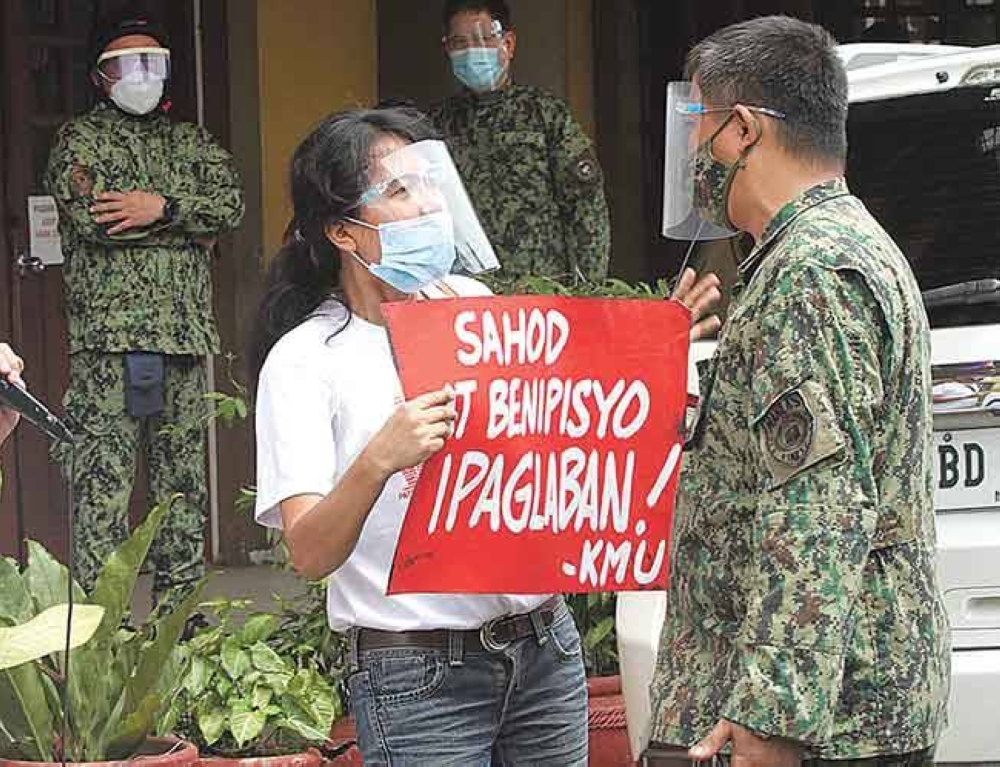 TOO CLOSE A member of one of the labor groups that held a rally in front of the Department of Labor and Employment building in Manila on Oct. 12, 2020 talks to a policeman who confronted the protesters calling for the release of their 13 month pay and other benefits. PHOTO BY RENE H. DILAN

"My advice to our employers is to talk with their employees. Employees know the situation of their employer. They have to come up with some creative consensus in order to address the problem," added Bello in a virtual press briefing.

Bello stressed that the labor department fully sympathizes with the present situation of employers but on the other hand, he pointed out, employers could not avoid paying their employers 13th month pay.

"The problem is, this is a statutory legal obligation. It cannot be waived, and it cannot be a subject of an exemption," he said.

Bello was reacting to an earlier statement by Employers Confederation of the Philippines (ECOP) President Sergio Ortiz-Luis Jr. that it would be difficult for most businesses, particularly MSMEs, to advance the 13th month pay of employees because of the dire economic situation they were in.

"The majority cannot advance. They are struggling," the businessman added.

Under the Thirteenth Month Pay Law or Presidential Decree 851, rank-and-file employees in the private sector shall be entitled to 13th month pay regardless of their position, designation, or employment status, and irrespective of the method by which their wages are paid, provided that they have worked for at least one month during the calendar year.

The formula and computation of 13th month pay is: Total basic salary earned during the year divided by 12 months equals to proportionate 13th month pay.

The frequency of payment of this monetary benefit may be the subject of an agreement between the employer and the recognized/collective bargaining agent of the employees.

Exempted from payment of 13th month pay are:

* government and any of its political subdivisions, including government-owned and controlled corporations, except those corporations operating essentially as private subsidiaries of the government;

* employers who are already paying their employees' 13th month pay or more in a calendar year or its equivalent at the time of the issuance of PD 851;

* Persons in the personal service of another in relation to such workers; and

*an employee who has resigned or whose services are terminated at any time before the time of payment of the 13th month pay is entitled to this benefit in proportion to the length of time he or she has worked during the year, reckoned from the time he or she started working during the calendar year up to the time of his or her resignation or termination from the service.