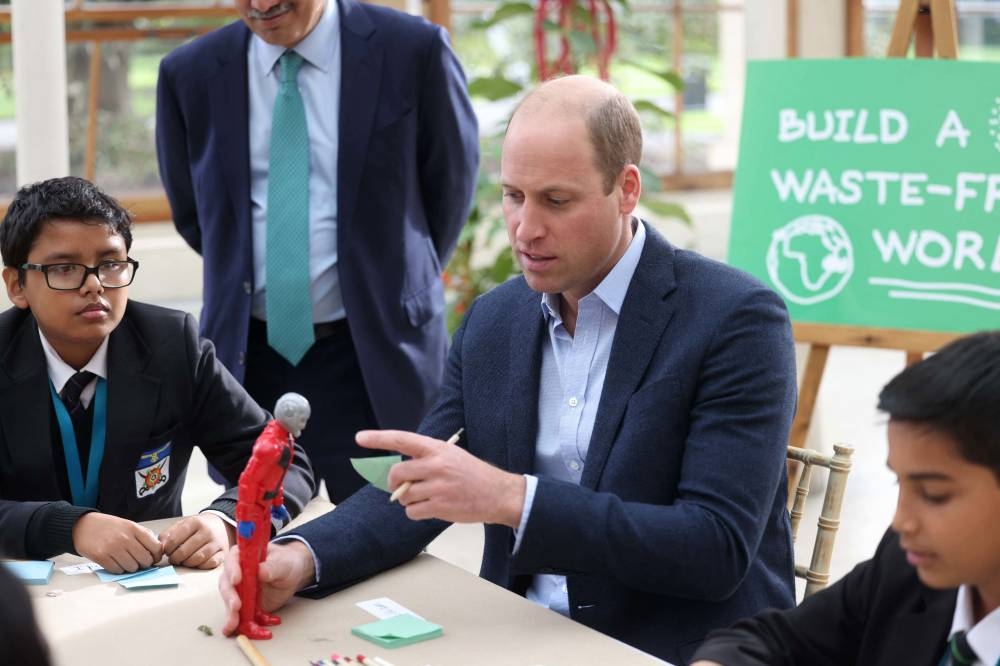 Britain's Prince William, Duke of Cambridge interacts with children from The Heathlands School, Hounslow during a visit to take part in a Generation Earthshot educational initiative comprising of activities designed to generate ideas to repair the planet and spark enthusiasm for the natural world, at Kew Gardens, London on October 13, 2021. AFP PHOTO

LONDON: Britain's Prince William on Thursday praised his father Charles for being "well ahead of the curve" on climate change, as the pair ramped up pressure ahead of the upcoming COP26 summit in Glasgow.

"He's had a really rough ride on that, and I think you know he's been proven to being well ahead of the curve, well beyond his time in warning about some of these dangers," William told the BBC.

"But it shouldn't be that there's a third generation now coming along having to ramp it up even more," he added.

"It would be an absolute disaster if (my son) George is sat here talking to you... in like 30 years' time, still saying the same thing, because by then we will be too late."

The prince spoke to the BBC ahead of the inaugural Earthshot Prize awards ceremony on Sunday, his initiative to honor those working on environmental solutions.

Looking ahead to the COP26 summit in Glasgow, which begins on October 31, William warned world leaders against "clever speak, clever words, but not enough action".

"I want the things that I've enjoyed — the outdoor life, nature, the environment — I want that to be there for my children, and not just my children but everyone else's children," he said.

"If we're not careful we're robbing from our children's future through what we do now."

Lifelong environmentalist Charles weighed in himself on Monday, saying that he was worried that world leaders would "just talk".

Queen Elizabeth II's eldest son and heir, 72, is due to attend events at the two-week summit along with his 95-year-old mother.

The UN summit will try to persuade major developing economies to do more to cut their carbon emissions, and get the rich world to cough up billions more dollars to help poorer countries adapt to climate change.

"The risks now are so great if you don't make the right move. It'll be catastrophic," said Charles.

"It is already beginning to be catastrophic, because nothing in nature can survive the stress that is created by these extremes of weather," he added.

Charles, whose Highgrove estate in western England has an entirely organic garden and farm, also outlined some of his own actions to reduce his carbon footprint, including cutting down on meat and fish.

In 2008, his office revealed he had converted an Aston Martin car he owns to run on biofuel made from surplus English white wine and whey from cheese manufacturing.