THE Department of Environment and Natural Resources (DENR) said on Wednesday that it was working double time for the Manila Bay dolomite beach to be reopened to the public and be fit for swimming by December.

"It's within reach. Basically, we can see that we can beat the deadline earlier. The real objective is to finish it not by the end of administration but within the year," DENR Undersecretary for Solid Waste Management and Local Government Units Concerns Benny Antiporda said in a press briefing. 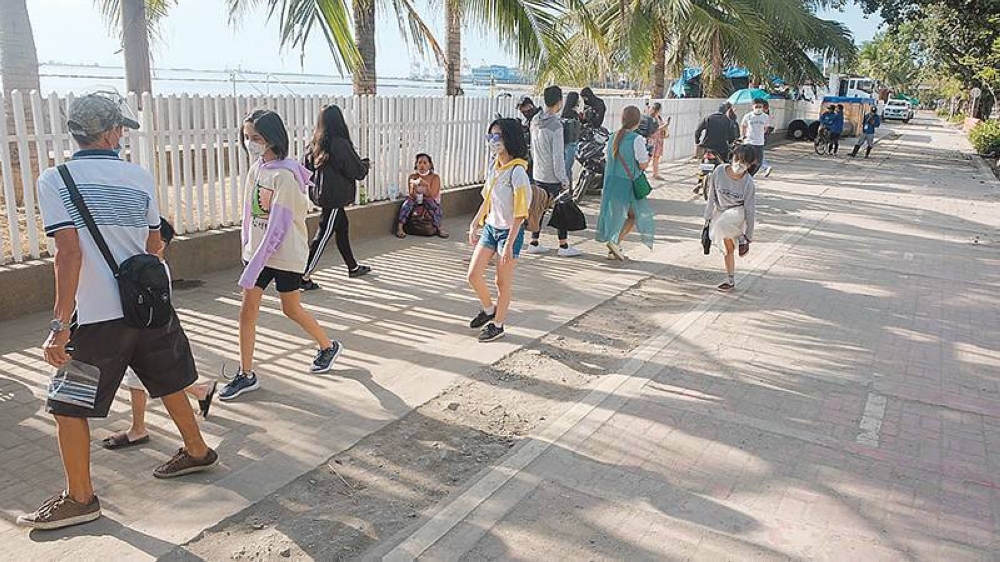 Fenced off People walk near the dolomite beach in Manila Bay on Wednesday, Nov. 3, 2021. The beach was closed to the public while rehabilitation work continues. PHOTO BY JOHN RYAN BALDEMOR

Antiporda said the DENR was completing all necessary nourishment and rehabilitation works in the dolomite beach, including making its waters fit for swimming.

Manila Bay's fecal coliform level was around 300 million most probable number per 100 milliliters (mpn/100ml) when the rehabilitation works started in 2018. The goal is to reduce the coliform level to about 200 mpn/100ml or below before 2021 ends.

"We'll do our best before the end of the year, before the Christmas season so Juan Dela Cruz (the people) can enjoy it. It's just that our situation is fragile because of the pandemic," he added.

The Manila Bay dolomite beach reopened to the public on October 16 following the implementation of the Alert Level 3 in the National Capital Region. It accepted visitors daily from 5:30 a.m. to 6 p.m.

In the latest development, DENR Undersecretary for Environment and International Environment Affairs Jonas Leones said the dolomite beach would remain closed until further notice due to rehabilitation works.

He said the decision to open the dolomite beach would be based on the advice of the Inter-Agency Task Force for the Management of Emerging Infectious Diseases on the Covid-19 pandemic situation.

"If the pandemic situation improves, we assure that we would open not only the dolomite area but the entire baywalk," Leones said.

He added that the DENR would also provide geo-engineering interventions and additional sewage treatment plants as part of the rehabilitation and nourishment initiatives in the area.

With an estimated cost of P398 million, the dolomite beach was created by covering the 500-meter stretch baywalk in the coast of Manila Bay with thousands of metric tons of dolomite from Alcoy, Cebu.