President Rodrigo Roa Duterte acknowledged the efforts of the Department of Transportation (DoTr), under the leadership of Secretary Arthur Tugade, and its Maritime sector, for the completion of the expansion project at the Puerto Princesa Port and the acquisition of new maritime assets that will boost the government's capability to secure and protect the country's territory. 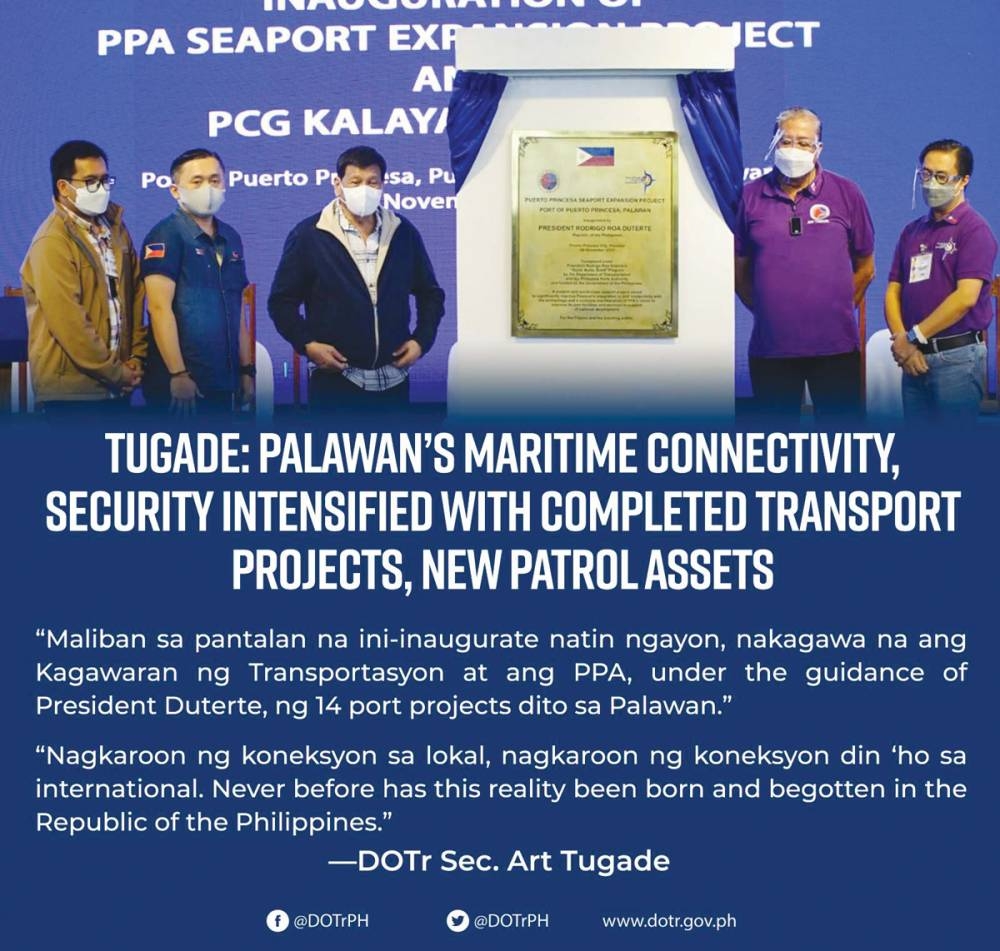 "I commend the DoTr and the PPA (Philippine Ports Authority) for the completion of this port expansion project. It is indeed a significant milestone under our 'Build, Build, Build' Program. I am excited to see the outcome of this infrastructure project, which is envisioned to boost growth in Palawan and its nearby areas," President Duterte expressed.

"Talagang happiness [is in the air] 'pagkat in addition sa ating pantalan na ini-inaugurate ngayon, alam n'yo po ba na nakagawa na ang Kagawaran ng Transportasyon at ang PPA, under the guidance of President Duterte, ng 14 port projects dito sa Palawan ("Really happiness [is in the air] 'cause in addition to our port being inaugurated today, do you know that the Department of Transportation and the PPA, under the guidance of President Duterte, have already built 14 port projects here in Palawan, " Secretary Tugade said.

Serving as Palawan's main maritime gateway, the expanded Puerto Princesa Port will also be able to double its current capacity. Every year, the port receives around 1,500 international and local vessel calls, while it also handles approximately 1.7 million metric tons of cargoes. Moreover, 200,000 passengers use the port annually, including almost 6,000 cruise-tourism passengers.

Prior to the unveiling of the marker of Puerto Princesa Port's expansion project, President Duterte also led the commissioning of the new aerial asset of the Philippine Coast Guard (PCG) – the multi-role fixed-wing aircraft, Cessna Caravan 208.

The new maritime asset is expected to boost PCG's capability in patrolling and securing the Philippine waters and in intensifying its response efforts and operations, especially during disasters.

The facility likewise aims to boost the PCG's monitoring and patrolling capabilities in the West Philippine Sea as it will serve as the operations headquarters in the area.

"As we bolster the connectivity in Palawan, we also look into fortifying our maritime security in the area. I am glad to know that the Philippine Coast Guard continues to be geared towards expanded presence in the West Philippine Sea and the Kalayaan Group [of Islands] to safeguard Filipino fishermen to venture into the sea of their daily livelihood," President Duterte said.