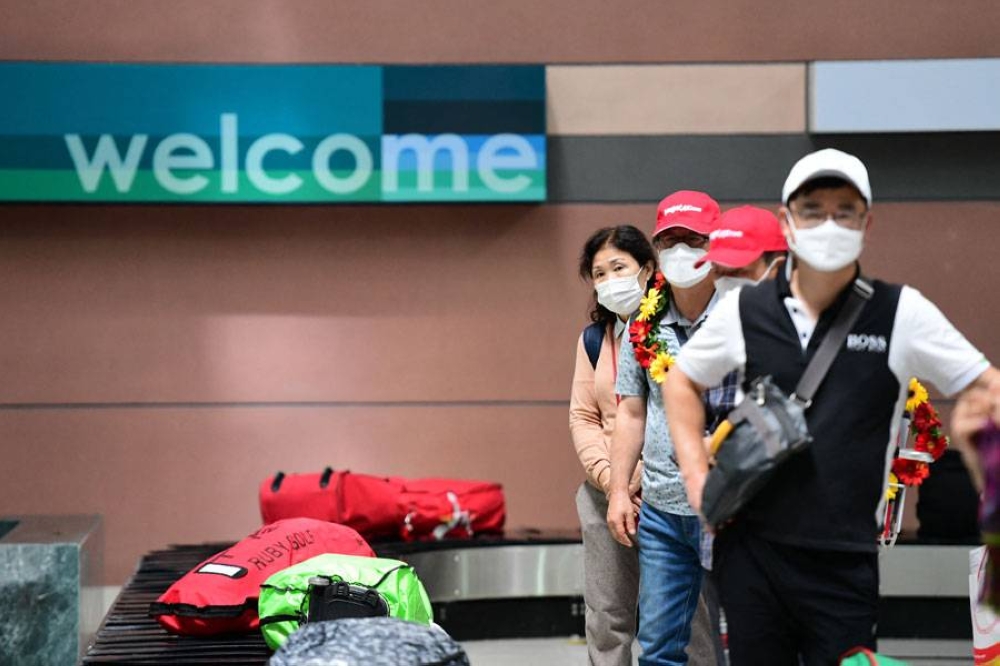 Arriving South Korean tourists wait for their luggage at Phu Quoc international airport on November 20, 2021, as the island welcomes its first international tourists to arrive after a Covid-19 coronavirus vaccine passport scheme kicked off this month in Vietnam. Nhac NGUYEN / AFP

PHU QUOC: Tour guide Phuc Lai Chi has been counting down the days until travelers return to the white-sand beaches and thick tropical jungle of Vietnam's Phu Quoc, a once-poor fishing island pushing to be Asia's next holiday hot spot as pandemic restrictions ease.

On Saturday, around 200 South Koreans touched down on the island, which is dubbed as 'Vietnam's Bali," which lies a few kilometers off Cambodia in the azure waters of the Gulf of Thailand, after a vaccine passport scheme kicked off earlier in November in Vietnam.

Among the arrivals was Lee Tae-hyeong, who was returning to the island for a third time and keen to make a beeline for the beach.

"It's wonderful to be here. This is my first time traveling out of South Korea since the pandemic started," he told Agence France-Presse (AFP).

But others may skip the lazy beach break in favor of action and entertainment as they shuffle between a 12,000-room hotel complex, an amusement park, 18-hole golf course, casino, safari park and miniature Venice.

The $2.8-billion leisure resort, part of the "sleepless city" model, opened six months ago as Covid-19 ravaged tourism across the world — and as other Asian countries reliant on the industry, like Thailand, were rethinking their mass tourism frameworks.

For 33-year-old Phuc, who remembers a poverty-stricken childhood where "everyone wanted to escape Phu Quoc," the island's growing popularity gave him a way to return home after years of scratching out a living as a salesman in the nearby cities of the Mekong Delta.

"But it's a pity also," he told AFP, lamenting the loss of the island's palm-fringed beaches to resorts.

Ahead of Saturday's reopening, staff at Vinpearl resort — where the arrivals are staying — swept beaches, arranged cutlery on tables and laid out sunbeds. Others busied themselves painting delicate flowers on conical hats.

"When we heard visitors were coming back, I was just so excited," said duty manager Thuong Ngo Thi Bich.

Before the pandemic in 2019, around 5 million people, including half a million foreigners — mostly from China, South Korea, Japan and Russia — holidayed on Phu Quoc.

Vingroup — the enormously powerful conglomerate behind the new complex — is pushing to make the island "a new international destination on the world tourist map."

To cater for the tourist boom, 40,000 hotel rooms have been built, planned or are under construction, vice chairman of the Vietnam Tourism Advisory Board Ken Atkinson told AFP — "that's more hotel keys than they have in Sydney, Australia."