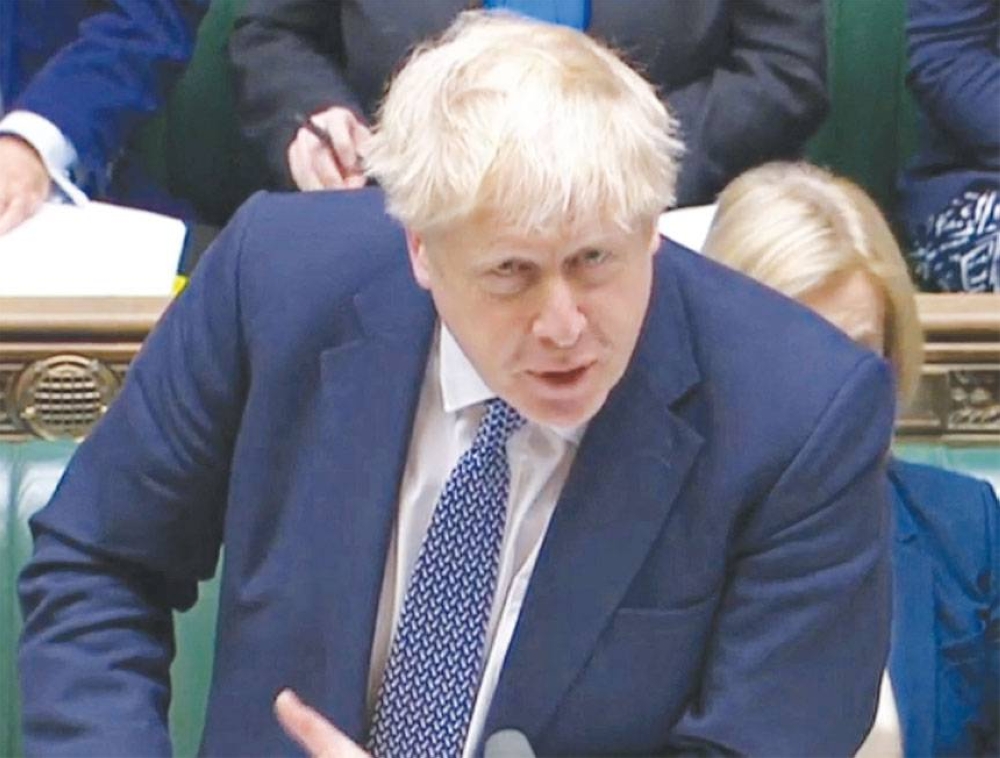 LONDON, United Kingdom: UK Prime Minister Boris Johnson was fighting for his political future on Thursday (Friday in Manila) as his Conservatives descended into open internal warfare after he belatedly apologized for attending a party during a coronavirus lockdown.

The apparent breach of Covid restrictions has enraged the public, who were forced to abide by rules that prevented them from visiting sick and dying loved ones or attending funerals.

Most cabinet members rallied around Johnson after his mea culpa, but the backing from some such as Rishi Sunak, his powerful finance minister and potential successor, was distinctly lukewarm.

The prime minister himself went to the ground on Thursday, canceling a planned trip to northern England after a family member came down with Covid-19, in scrupulous adherence to his government's rules.

And the scandal looked set to deepen Friday as the conservative-leaning Daily Telegraph published an exclusive claiming that Johnson's staff had held a raucous party just hours before the socially distanced funeral of Prince Philip.

Queen Elizabeth sitting alone in the church due to Covid regulations provided one of the starkest images of Britain under lockdown.

While expressing "heartfelt apologies," Johnson this week sparked ridicule by saying he had believed the May 2020 gathering was a work event.

He urged all sides to await the findings of an internal inquiry.

Douglas Ross, the Conservatives leader in Scotland, joined at least four Tory backbench MPs in calling for Johnson to quit after the prime minister admitted joining the party in his Downing Street garden in May 2020, when Britain was under a strict lockdown.

"Regretfully, I have to say his position is no longer tenable," Ross told STV.

Cabinet member Jacob Rees-Mogg dismissed Ross as a "lightweight" Tory figure, sparking rebukes from other MPs and warnings that the upper-crust Englishman was bolstering the case for Scottish independence.

Northern Ireland Secretary Brandon Lewis insisted Johnson had been "very, very sincere" in his apology, amid warnings that Conservative MPs could be mobilizing for a no-confidence vote.

"He does recognize the anger and upset and frustration that people feel at what they perceive happened at No. 10. He recognizes that and takes responsibility," Lewis told BBC radio.

But Lewis was forced to play down reports that Johnson had in the wake of his House of Commons apology told Ross and other Tories that he did not believe he had done anything wrong.

On Wednesday, Labor leader Keir Starmer for the first time joined other opposition chiefs in demanding that Johnson resign.

One new poll by YouGov in The Times newspaper gave Labor a 10-point lead over the Tories, its biggest margin since 2013, and said six out of 10 voters believe Johnson should resign.

Senior Labor MP Lisa Nandy said the prime minister was likely to face new revelations after Johnson previously insisted in parliament that no Covid rules had been broken in 2020.

Relatives left bereaved by Covid and unable to say their final goodbyes felt "appalled, horrified and re-traumatized" by Johnson's attendance at the party, Nandy said on ITV, urging the police to investigate.

London's Metropolitan Police have not ruled out a criminal probe into the party, which occurred at a time when Britons were banned from outdoor socializing.

But for now, Johnson's fate appears to lie in the hands of senior civil servant Sue Gray, whom he has commissioned to look into the May 2020 event and other Downing Street gatherings that year.

Chancellor of the Exchequer Sunak, who was noticeably absent from the House of Commons on Wednesday, said Johnson had been right to apologize and urged "patience" pending Gray's report.

Johnson's official spokesman insisted the cabinet was united in delivering the government's post-Brexit and post-pandemic priorities.

"The prime minister abides by the principles of public office," he told reporters, stressing that Johnson had promised to publish Gray's report and then update parliament.

The government suffered a further blow Thursday with news that its deputy chief medical officer Jonathan Van-Tam — a gifted and colorful communicator during the pandemic — was leaving to go back to academia.